A re-post on the anniversary of Pete Quaife's passing... Born: Dec 31, 1943 in Tavistock, Devonshire, England
Died: June 23, 2010 in Denmark
For many years, Peter Quaife was the odd man out in the Kinks’ history — the first of the original bandmembers to leave the lineup, back in 1969, following work on Village Green Preservation Society. Born in Tavistock, Devon, Peter Quaife grew up in London, where he was a friend of Ray Davies; indeed, Daviesand Quaife co-founded the band that became the Kinks, before Ray’s younger brother Dave was part of it. Unlike drummer Mick Avory, who was supplanted byBobby Graham on virtually all of the earliest recordings (through the first album),Quaife played on the group’s records from the beginning, and his rock-solid bass work contributed immeasurably to the power of their work on-stage, making possible such moments as the marvelous stretching out on the extended jam from The Live Kinks, in which his instrument holds the sound together as the band drifts between its own songs and a unique take on the “Batman” theme. He also sang backup on a lot of the records during his tenure, most notably — according to a 1998 interview with Martin Kalin — on “Waterloo Sunset.” He was never permitted to engage in songwriting as such, however, and admitted in the same interview that he and Avory often felt like session players at the band’s own recording sessions — moments such as the Kelvin Hall live album were relatively rare, allowing him to step out in front.
Quaife left the band following what was his most substantial contribution to the group, Village Green Preservation Society, the album on which — perhaps because of its extended gestation — he was most able to express himself musically. He and Canadian guitarist Stan Endersby formed Maple Oak with drummer Mick Cook and keyboardman Marty Fisher. In more recent years,Quaife has moved to Canada and also embarked on a writing career, and has had intermittent contact with Ray Davies over the years — he emerged most prominently in interviews connected with the 2004 expanded reissue of Village Green Preservation Society. ~ Bruce Eder, All Music Guide
http://www.kindakinks.net/misc/interview-200511-quaife.html

I'm sad to report the death of Pete Quaife, the Kinks' original bass player. Pete died yesterday, June 23rd, 2010 of kidney failure after spending several days in a coma in a hospital in Denmark.

Founding member suffered from kidney disease for more than a decade

By  Andy GreeneJun 24, 2010 7:21 PM EDT
Pete Quaife, the original bassist in the Kinks who played with the British Invasion band from their formation in 1961 through 1969, has died, according to a source close to the band. He was 66. The exact cause of death is unknown, but he had been undergoing kidney dialysis for over a decade. Quaife played on all of the early Kinks classics, including “You Really Got Me,” “All Day and All of the Night,” “Dedicated Follower of Fashion” and “Waterloo Sunset,” which also features his background vocals.
Look back at classic photos of the Kinks, onstage and off.
Quaife grew up in the same neighborhood as the Davies family and met Ray in music class at William Grimshaw Secondary Modern School in Muswell Hill, England. Ray was impressed by Pete’s guitar playing and invited him to jam with him and his younger brother Dave. “After some jamming and loose rehearsals it was decided that Pete would team up with us,” Dave Davies wrote in his memoir, Kink. “We drew lots to see who would play bass guitar and Pete lost.”
In October of 1961 the group — with Quaife’s friend John Start on drums — played their first gig at a school dance with a set that consisted of covers by the Ventures, the Shadows and Duane Eddy. They began playing gigs around town both as the Ray Davies Quartet and the Pete Quaife Quintet, depending on who booked the gig. By 1963 the group — now known as the Kinks — began recording with producer Shel Talmy, who got the group signed to Pyre Records. Their third single, “You Really Got Me,” was a smash hit, instantly making the Kinks one of the biggest bands of the exploding U.K. rock scene.
Despite the Kinks’ success, Quaife was never satisfied with his role in the creative process. “I would have been squished with a size 16 boot I had even suggested they listen to an idea from me,” he said in a 2005 interview. “I felt like a session man most of the time. Ray wanted complete control of everything. He was a control freak.” In June 1966 Quaife broke his leg in a car accident and briefly left the band. “It was a good break for me,” he said in 2005. “The band was fighting all the time and I couldn’t take it.” He rejoined after a few months, but quit for good three yeas later. In a 1998 interview, Quaife pointed to the band’s 1968 discVillage Green Preservation Society as his favorite. “For me, it represents the only real album made by the Kinks,” he said. “It’s the only one where we all contributed something.”
Exhausted by the infighting, Quaife quit the Kinks in 1969. “The Kinks put on a happy façade to the outside world,” he said. “Behind closed doors it was like the WWF. We hurt ourselves with the constant scraping.” Quaife formed the country rock band Maple Oak later that year, but left the band just a year later and largely retired from music. In the 1980s he moved to Canada and began earning his living as a graphic artist. When he was diagnosed with renal failure in 1998, he began drawing cartoons about his experience undergoing dialysis treatment. He last played with the Kinks at their induction in the Rock and Roll Hall of Fame in 1990.
http://www.lightersideofdialysis.com/
The Lighter Side of Dialysis: Peter Quaife’s book of cartoons 2010

Posted by T. Tex Edwards at 11:22 AM No comments: Links to this post

"Chanson D'amour" by The Hall of Mirrors 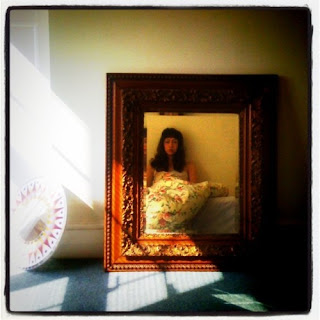 My New Mirror (Taken with instagram) [from the bands Tumblr page]


Just read a hype post (at PopJunkieTV) on this new band, The Hall of Mirrors.
Quote: “The band is essentially the hugely talented Jessica Spencer who mixes Nico era Velvets with French 60s pop and a smidgeon of 80s indie.”
I do like this tune a bunch, but the new single they are pushing “Springime” really turned me off. Guess that must be representative of the band’s “smidgeon of 80s indie.”
The band's Tumblr is at: http://thehallofmirrorsmusic.tumblr.com/
—T
Posted by T. Tex Edwards at 10:12 AM No comments: Links to this post