Kat's Karavan entry from the Handbook for TX Music

From William Williams (the man with the great name) at my old hometown's Big D 60's Music Yahoo Group:


"Gene F. is doing some work on the upcoming revised edition of the Handbook of Texas Music, and I noticed this article on Kat's Karavan. Staying up late with a transistor radio under the covers listening to all this really wild music that you couldn't hear anywhere else - those were formative music experiences for me."
KAT'S KARAVAN.


Kat's Karavan was a rhythm-and-blues radio program broadcast from Dallas from 1953 to 1967 on WRR-AM. The program aired R&B music to a primarily white teenage audience with burgeoning interests in music previously off-limits to them because of contemporary race relations.
In the 1950s white-owned radio stations across the country were just beginning to dabble in playing music made by African Americans. Unsure of the commercial prospects of such a venture, many radio stations were reluctant to cross racial lines in their programming. Kat's Karavan defiantly played early R&B music performed by blacks, even though the show was hosted by and aimed at whites. The show was particularly influential because of its formatting, its personalities, the large region it broadcast to, and the number of famous musicians who came of age while listening to it.
Kat's Karavan showed strong support for local music acts such as the Nightcaps, who recorded their only album (Wine, Wine, Wine) at the WRR studio in 1959; the single of the same name was used as a promotional vehicle for the show. This album, which also included the song "Thunderbird, " influenced upcoming local artists including Jimmie Vaughan, Stevie Ray Vaughan, and members of ZZ Top.
While promoting local music, Kat's Karavan also exposed its listeners to musicians from outside Texas, including such legendary blues figures as John Lee Hooker and Muddy Waters. Thus the show intended to expand the horizons of its listeners and inform them of the musical styles being created by black musicians.
The show's disc jockeys also contributed to its success. Kat's Karavan was co-hosted by Jim Lowe, Jr., and Bill Carroll, who provided comedy for the listeners and encyclopedic knowledge of the music and the musicians. Lowe became such a well-loved figure in the Dallas area that, for forty years, he was the voice of the mechanical cowboy, Big Tex, at the State Fair of Texas. Another notable co-host of Kat's Karavan was Englishman John Peel. His work on the show in 1961 marked his early broadcast career before he returned to England to host the BBC radio program Top Gear. (In 2009 a CD set chronicling Peel's broadcasts later in his career was named KatsKaravan.)
Kat's Karavan was also successful because of its unique format. Lowe and Carroll divided the show into two parts. The first began at 10:30 each weeknight and centered on R&B vocal groups, while the second began at 11:15 and focused on both electric and acoustic blues. All these blues styles influenced the development of R&B. The show informed listeners of contemporary R&B developments and their historical backgrounds. Two rare segments of a 1961 broadcast of Kat's Karavan have been discovered and donated to WRR by a private collector.
BIBLIOGRAPHY: Dallas Observer, November 11, 2004. Robert Wilonsky, "Peeling Back John Peel's Dallas Daze," Dallas Observer, May 16, 2007 (http://blogs. dallasobserver. com/unfairpark/ 2007/05/peeling_ back_john_ peels_dallas. php ), accessed October 23, 2011. Kevin Walters, "Historical 1961 WRR Broadcasts Found" (http://ryono. net/xtra/ oldies/1957/ jimlowe.htm), accessed October 23, 2011. Cathy Brigham
Posted by T. Tex Edwards at 7:45 AM No comments: Links to this post

From THE TELEGRAPH's Donna Bowater:
"Tributes have been paid to Leven, who enjoyed great critical acclaim but little commercial attention for his soulful music inspired by his colourful life.
His career spanned four decades and included homeless spells for the Kirkcaldy contemporary of former Prime Minister Gordon Brown.
Born into a Romany family in 1950, Leven played in local bands as a young man before leaving Scotland when he attracted the attention of gangs.
He slept rough, spent time busking and became addicted to heroin as well as a heavy drinker.
But along the way, his distinctive works were hailed as masterpieces, taking in the characters and experiences he met with on his travels."
From WIKIPEDIA:
"Doll by Doll were a London based rock band formed by Jackie Leven in 1975. They came to prominence during the New Wave period but were largely ignored by the music press of the time - their emotional, psyschedlic-tinged music was judged out of step with other bands of the time."

From TROUSER PRESS' Ira Robbins:
"The only constant on Doll by Doll's four albums is singer/guitarist Jackie Leven, who began as the leader of a quartet and wound up its only member. On the first three LPs, his presence is so commanding — thanks to a deep, rich, expressive voice that leaps into falsetto or descends to an ominous whisper as the moment dictates — that everyone around him takes a back seat. An impressive but flawed debut, Remember needlessly limits Doll by Doll's obvious electric strength. Although some tracks rock out, the group's folk roots place song before the performance, occasionally blunting the excitement. A sophisticated work that serves mainly to introduce Leven's startling voice."

A statement on his website announced his battle with cancer shortly before he died. It said:
"Please excuse this rather impersonal note. Sometimes, you have to tell people about the Bad, as well as the Good. It is with a heavy heart, therefore, that I have to relate the sad news that the great Scottish singer-songwriter JACKIE LEVEN is gravely ill, suffering from cancer, and, in all candour, has only a few days to live.In a career stretching over forty years, Jackie Leven has carved an impressive reputation as a uniquely gifted singer-songwriter. From his emergence as leader of the underrated DOLL BY DOLL in the seventies, through well documented addiction problems which Leven overcame with remarkable strength of will, culminating in a solo resurgence through the 1980s to the here and now, Jackie has amassed an amazing body of work – the composer of over four hundred songs, including arguably his greatest song – `Call Mother', from the album `Mystery of Love' (ranked by Q magazine as one of `100 Best Albums of All Time'..."

Uploaded by Fusselkopf6699 on Sep 2, 2011
"...If sales didn't always reflect the overwhelmingly positive critical reception his albums received, he nonetheless remained a perceptive writer and performer. Jackie was imbued with a restless creativity, and always searching for new settings for his ruminative lyrical forays, laced with humour and melodic grace. As a performer, Jackie could enthral and entrance the audience with picaresque tales taken from first-hand experience. Those that have worked with Jackie will know of his mordant wit and very idiosyncratic world view. His latest release, Wayside Shrines and The Code of the Travelling Man, recorded with multi-instrumentali st Michael Cosgrave was yet more proof of Leven's enduring talent and inexhaustible creative energies."


Here's one of Jackie's songs with some Tim Hardin overtones:

Jackie Leven : "My Philosophy"
Uploaded by paganmaestro on Sep 5, 2010
I do not remember how I came to have in my possession this recording of Jackie Leven's. Perhaps a friend in the UK sent it to me among a batch of albums to consider for my radio show. In any case, it was this song, "My Philosophy," from the Shining Brother Shining Sister album, which first caught my attention. I'm not sure why. It's a mysterious sort of song, beautifully ragged in its way, intimate, sonically rich, and featuring a vocal that is compellingly honest. I still don't know much about Jackie Leven, other than a few things I've read. I know he's done some wandering. lived close to the bone, busked for a living back along the years, including a stint living in corners of the South Bank Centre, London, where he once played the streets for his living. I know he's Scottish by birth, that his parents had a love for American folk blues. Leven's also lived in County Kerry in Ireland, and in Berlin and Madrid, and spent time in squats across the UK, where he began to encounter people with real and sometimes serious mental illnesses and disorders. He often quotes the American poet Theodore Roethke's line, '...for what is madness but nobility of soul at odds with circumstance?'. Perhaps there's something in his affection for that Roethke quote that explains my attraction to his work and, in particular, this song, "My Philosophy". There's an embrace of the dark in this song. If you've read Lorca - "Those dark sounds are the mystery, the roots that cling to the mire that we all know, that we all ignore, but from which comes the very substance of art." - you'll know what I'm talking about.
A final live track from a gig this last August:

Uploaded by UnkleDave6 on Jun 8, 2011
Last night (8/6/11), another great gig at King Tuts - the legend that is Jackie Leven!
From BBC NEWS/EDINBURGH, FIFE & EAST SCOTLAND:
Tributes have been paid to the Scottish singer songwriter Jackie Leven, who has died at the age of 61, after a battle with cancer. 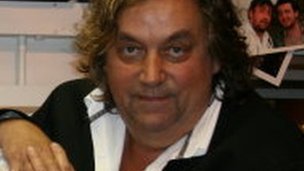 He was the founding member of the punk band Doll by Doll, and also enjoyed a lengthy solo career.
Among his many releases was a joint album with the crime writer Ian Rankin, who like Mr Leven hailed from Fife.
A reformed drug addict, he and his wife set up a charity for the treatment of heroin addiction.
Ian Rankin posted on Twitter: "RIP Jackie Leven. Gentle man, poetic songwriter, skilled guitarist, storyteller. It was an honour to call you friend."
BBC Radio Scotland presenter Tom Morton also used the social networking site to pay tribute to the singer.
He tweeted: "Wish still had some Leven's Lament whisky to drink to his memory. We'll miss him."
Checkout ....
http://www.jackieleven.co.uk/


"Sadly, Jackie died last night (Monday) - the news broke not long after that of his mortal illness. I met him several times over the years. It was hard to reconcile the affable bloke with the fantastic humour and amazing songs with the one who I first saw sing with Doll by Doll at Nottingham's Garage in 1979. Man, he was scary. 'One of the few good shows we played', he told me twenty years later. DBD were a great post-punk group with a handful of really strong numbers (including ballads like Janis & Strip Show that pointed the way to some of the later solo work) but they weren't his first venture. I have a cd by St John Field which is Jackie in the early 70's, channeling his inner CSN and Van Morrison. He came back from a near fatal mugging and heroin addiction to become an incredibly prolific songwriter and superb raconteur - he made me laugh more than any stand-up comic currently on the circuit. I had a ticket to see him in Derby last month. Now I know why the gig was postponed. Several friends and I were looking forward to it immensely. You were guaranteed, an intense, entertaining two sets. Jackie never played encores (he might just do a request, if he was feeling generous, but only the one, mind). He would, however, give fans a hug or a kiss or an autograph after the show, and I usually had a little chat with him. Last time round I wished him well for his upcoming 60th birthday, which he wasn't looking forward to. He was 61 this year. "
Posted by T. Tex Edwards at 1:39 PM 1 comment: Links to this post

For the complete show  on FLAC: http://halsprogressiverockblog.blogspot.com/2011/11/pink-floyd-1967-09-10-stockholm-flac.html
Posted by T. Tex Edwards at 11:48 PM No comments: Links to this post