In 1957 he cut this here tune Lookin' For Money.Mr. Urban totally cut 3 singles for Sarg label. Sarg Records was founded by Charlie Fitch, based in Luling, Texas. The absolutely first recordings of Willie Nelson and Doug Sahm were issued at Sarg. Link Davis, Floyd Tillman, and more pretty unknown rockabillies roared into the mics at the Sarg label from Luling TX, as well. By the way, i think it's Hal Harris playin' lead on this track.

Al Urban was born on a farm in Gonzales, Texas, on March 1, 1935. He began playing the guitar in his mid-teens and formed his first band, The Daybreakers, in the early fifties and obtained a regular gig at the popular Log Cabin Inn north of Luling. In 1956, Urban recorded his original songs Lookin’ For Money and I Don’t Want To Be Alone at Gold Star Studio in Houston. Al sent the master Tape to Charlie Fitch who agreed to release it on Sarg Records. The record debuted on November 30, 1956 receiving rave reviews from Billboard magazine. It was a modest hit and sold respectably. Urban was invited to appear on the Louisiana Hayride on the strength of the single. He was a prolific songwriter often returning to Bill Quinn’s Gold Star Studio on his own dime to record his compositions. George Jones was using the same studio during the same period and the two often shared the same backing band. Charlie Fitch released four more Urban records and passed on several others. Disgruntled with Fitch, Urban started his own label, Fang to promote his releases, and eventually recorded for several other small labels as well, including Kash and Tennessee. He continued to be an active performer, but tiring of the nightly grind; he began concentrating more on songwriting. His windfall came in 1971 when Charley Pride recorded several of his songs including the hit ,I’m Beginning to Believe My Own Lies that was included on the Grammy award winning album Charley Pride Sings Heart Songs.
Sources and Acknowledgments
Brown, Andrew. The Sarg Records Anthology. Book Accompaniment to CD Box Set: Bear Family Records. 1999
via http://sargrecords.com/2010/06/22/al-urban/

From I Just Dropped In To Say Goodbye http://www.cdbaby.com/cd/alurban Al Urban
© Copyright-I Just Dropped In To Say Goodbye(634479959677)
Record Label: Al Urban
Singer, entertainer and recording artist Al Urban has sung his way through many years of changing country & western styles-from traditional to rock a billy and from swing to contemporary. In "i just dropped by to say goodbye" he treats his fans to vintage Urban - a return to the traditional roots of country songs. No body can write or sing a country song quite like Al. This CD contains eleven examples of his distinctive style and ability to put the many sides of love into haunting melodies. His golden baritone caresses the lyrics of each perfectly crafted story line and captivates you throughout the musical journey. This is a "must have" collection.

By Cannon News Services
Posted January 20, 2012 - 10:52am
URBANAlvin Urban, was born on March 01, 1935 in Gonzales, TX to the late Mr. Peter Paul Urban and Mrs. Beatrice Shelton-Urban. Al Urban passed away in Seguin, TX Wednesday, January 18, 2012 at the prime age of 76. Al was a member of the East Side Baptist Church of Gonzales. He was a wonderful father, grandfather, uncle, and friend to all who knew him. He resided in Gonzales, TX with his family he will be greatly missed. Al was specially known for his love of music he was a local singer and song writer. He is preceded in death by his parents and is survived by his only daughter Sherian and husband Mike Cleveland of Gonzales, TX; one brother George Urban of Victoria, TX and two grandchildren Jonathon and Eric Cleveland.Visitation for family and friends held at the Buffington Funeral Home Chapel on Saturday, January 21, 2012 from 11:00 AM to 9:00 PM. Funeral Services held for 2:00 P.M Sunday, January 22, 2012 at the Buffington Funeral Home Chapel officiated by Reverend Hollas Hoffman. Internment followed at the local Gonzales City Cemetery. Pallbearers: Paul Elder, Kenneth Stewart, Daniel Stewart, Marshall Davis, Danny Sloan, Freddy Fisher, Gary Schroeder and Mike Dossey. Any condolences or words of comfort for the Urban family can be left online atwww.buffingtonfuneralhomegonzales.com.  Arrangements made by Buffington Funeral Home, 424 St. Peter Gonzales, TX 78629; 830-672-3322.
via: http://www.gonzalescannon.com/node/8044 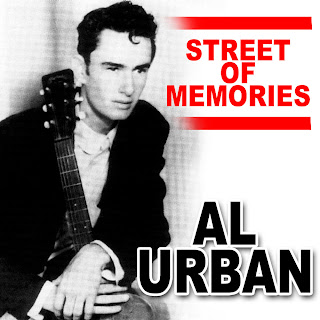 The Book Of Fools 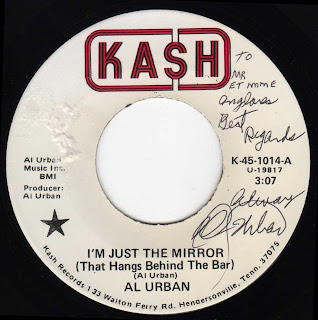 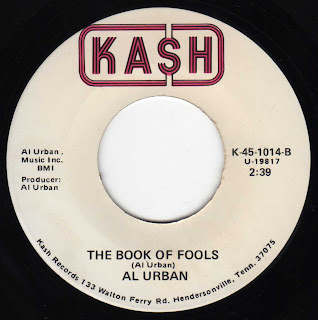 What a beautiful voice, just golden on his ballads.. so glad he persisted May his soul rest and his survivors know his special place in time and as true TX music legend. ~TKT

AL URBAN – I JUST DROPPED IN TO SAY GOODBYE

The story of « Sarg » records started in a small town called Luling, in Texas, located 40 miles away from San Antonio. The town looked like an old Western town but smelling oil but hosted a small wooden store with a sign above the door announcing “Sarg Records Compagny”. The proprietor, Charlie Fitch, had a TV repair shop and a records store and did good business. That where come, on day of summer 1956, a 21 years old Gonzales’ (Tx) cat with a demo tape of his songs. That cat was playing music since the early 50's and already had a record on its own “Dixie” and was looking for great time. Alvin Peter Urban had also a single on its own APU record label around 1957. It's not clear if that record was out before or shortly after the Sarg agreement. Soon were issued “Lookin’ For Money”/”I Don’t Want To Be Alone” (SARG 148 – Jan 1957) ) and “Won’t You Tell Her Name”/”Gonna Be Better Times” (SARG 158 - March 1958) and a third single “Street of Memories” (SARG 174) followed in May 1960. All classic songs but then Al had to left that label ‘cause no a single penny was ever paid to him. He staged the Louisina Hayride several times in 1960 playing with Tony Douglas, Jerry Jericho, Johnny Horton, Warren Smith or Carl Belew. He was a devoted fan of Claude King, Lefty Frizzell and Jim Reeves.

In the early 60’s, Al issued few records on its own Fang label and worked with Charlie Walker. Later, he got records on his own Kash record label and at the dawn of 70’s some of his were songs were recorded by Charley Pride.

Few years ago, he participates with Cecil Moore to a documentary called “Sergeant Fitch”. His story was told on “Blue Suede News” in 2003 by Caroline Gnagy, member of the Casey Sisters, and he became friend with Marti Brom when she was living in Austin (Texas). He recorded a couple of songs with Jimmy Day before he died, played on stage with Wildfire Willie and The Ramblers (from Sweden) and was on stage at the Greenbay festival in 2005. He’s not from the past, for sure! Al was a great friend of several record collectors and 50's musical writers as far as Europe like Joe Watson, a Texas Bop crazy!

Al's CD “I Just Dropped In To Say Goodbye” treats his fans with vintage and traditional roots of country music. This CD showcases his ability to put the many sides of love and will captivate yu’ll. Recorded in Round Rock (Tx) and Hendersonville (Tn), those eleven sides feature first class musicians on guitar, fiddle or steel gtr. That's what country music is all about and should have stayed. Authentic, sincere, down hearted.

“I Just Dropped In To Say Goodbye” is a great sad song about divorce and will talk to many listeners just as sure as did “Dear John” in the 50’s. “Used Wedding Rings” talk about how pawn shop host memories of the past and “Broken Hearted House” feature nice fiddle and piano triplets. “T.I.M.E” brings here steel gtr and open the door to “Country Songs and Angels”, a beautiful song about churches and songs. “If I Paid The Band To Stay” tell about a magic moment at a country dance and “Fire Of Love” about time and faded love. “When The Train Come In” and “Two of A Kind” are other great ballads. “I Already See San Antone” is the only up-tempo number and Al’s tribute to Texas. A great dance ditty that will make you tap your feet and raise you spirit.

“The Good Old Days” close that nice authentic traditional country CD and bring the nostalgic of those good old days before Luling began to decline in the late 60’s and left “SARG” as a ghost of the past. When Al came there in 1956 “Lookin’ For Money”, he found none … In 2009, he pretended “I Just Dropped To Say Goodbye” and that's what he did on January 18th.

I bet my country overall, we will meet someday in a place where nobody's looking for moneeeeeeee. Until that day my lovely and talented friend will be sadly missed.

al urban is the best person i have ever known

Al Urban was my grandfather. i could not have asked for a better role model, the character and integrity that and source of tradition that he produced in his music has been a standard to live by i have been singing playing guitar and writing songs from the time he showed me the first guitar chord i learned at age nine.for my for my fourteenth birthday he gave me a 1961 gibson SG with ampeg amp with two fifteen inch speakers and told me to always protect my fingers because they could make more money playing music than i could building fence.
Rest in Peace "PoPo"

Trying to get ahold of Al's daughter Sharon , if anyone one could help . I am a daughter of Al's friend Johnny Vrazel . Missy Zissa , I live in Shiner , Texas . 401-0685 any help i'd be so Thankful