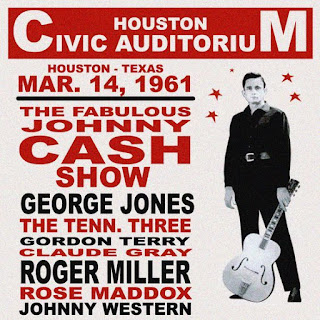 Roger Miller: 01. Footprints in the Snow 02. Invitation to the Blues 03. That’s the Way that I Feel 04. Half a Mind 05. Tall Tall Trees 06. Billy Bayou 07. In the Summertime George Jones: 08. Ragged but Right 09. Accidentally on Purpose (breaks up, not good quality) George Jones & Roger Miller: 10. Ways of the World, Ways of a Woman 11. Long Time to Forget George Jones: 12. White Lightnin 13. Window Up Above 14. Treasure of Love Johnny Cash and the Tennessee Three: 15. Big River 16. I Guess Things Happen That Way 17. Rock Island Line 18. Instumental 19. Five Feet High and Rising 20. I Got Stripes 21. Folsom Prison Blues 22. I Walk the Line 23. Lead Me Father 24. Ballad of Harp Weaver 25. The Rebel Johnny-Yuma 26. Luther’s Boogie 27. Goodbye Little Darling REMOVED: Johnny Western, Gordon Terry, Claude Gray, Rose Maddox Notes: Johnny Western, who emceed this 1961 show, would later become part of Johnny Cash’s band. Roger Miller, who had already written hits for Faron Young, Ray Price, Ernest Tubb, Jim Reeves, and George Jones, was just getting started as a performing artist. Fiddler Gordon Terry joined the Grand Ole Opry in 1950 and played with Bill Monroe’s Bluegrass Boys. His biggest single, “Wild Honey”, charted in 1957. Claude Gray’s career was hot in 1961: "I'll Just Have a Cup of Coffee (Then I'll Go)," was a crossover pop hit at that time. George Jones, still basking here in the glow of his 1959 hit “White Lightnin’”, would soon move away from his honky-tonk, rebel image: His smooth ballad “Tender Years” was Number One for seven weeks later in 1961. Rose Maddox (formerly of the fantastic hillbilly band Maddox Brothers and Rose) had five Top 20 hits in that year, including both sides of the 45 “Kissing my Pillow” and “I Want to Live Again”, which are performed here. Finally, Johnny Cash performs his hits, in- cluding “Luther’s Boogie”, which, interestingly, was the highest charter of all of them.

Thanks to:
Tyler Wilcox
Posted by T. Tex Edwards at 12:55 AM

This is a testimony that I will advise everyone to read because what I experienced was miraculous. i have been married  4 years and on the fifth year of my marriage, another woman had a spell to take my husband away from me and my husband left me and the kids and we have suffered for 2 years until i meant a post about dr jumba   helping people to bring back broken relationship  and i decided to give him a try to help me bring my beloved Husband home and believe me i just send my picture to him and that of my husband and after 48 hours as dr jumba  told me,  my husband came back home and ask for forgiveness i was surprise to see him after a long time. he  came back to me and the kids and that is why i am happy to make every one of you who has similar problem or any difficulty in his/her relationship  to contact dr Jumba and get your problems solved, His email: wiccalovespelltools@gmail.com or wiccalovespelltools@yahoo.com you can also contact him or whatsApp him on this +19085174108 .  thank so much  WEBSITE :  https://drjumbaspellhome.wordpress.com IF you want to know more about dr jumba services . YOUTUBE: https://youtu.be/kBvs5nQcjWo