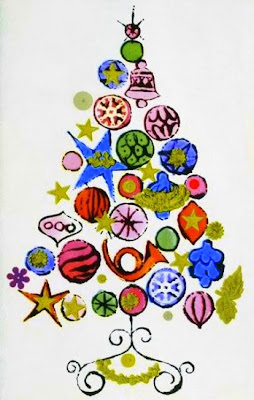 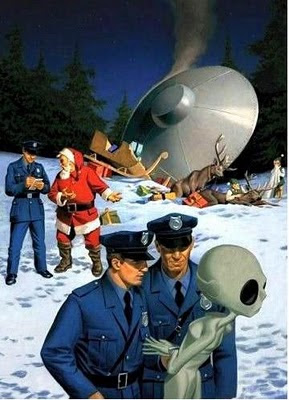 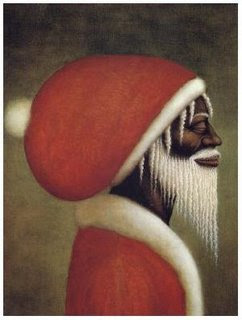 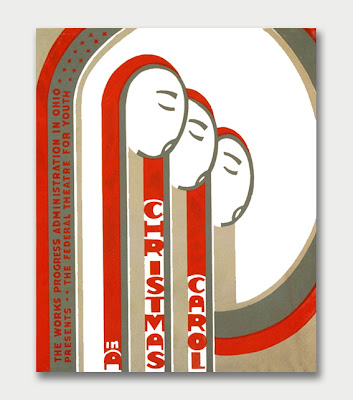 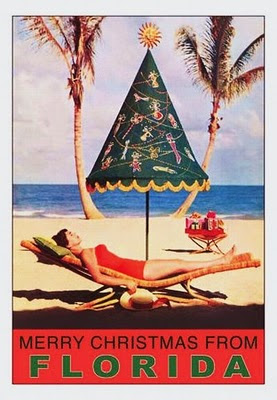 from Mark at Down Underground blog 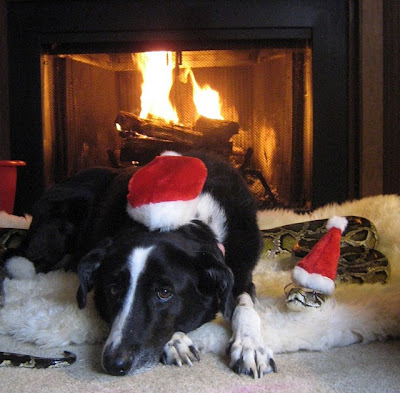 It's Beginning to Look a Lot Like Serpents (and a mutt)
New skills acquired this week:
*building a big fire
*getting a border collie to endure a stupid hat for 2 mins without moving
*getting a Burmese python to endure a stupid hat (okay, I'll confess, this required scotch tape)
*then getting these two long-term siblings to lie together on a fur rug with their backs to a roaring cracking fire which neither felt happy about
*then throwing myself flat on the floor looking like a complete doofus to get 8 photos in 15 seconds, which is all the time they would endure side by side AND wearing stupid hats
This was the best of the 8, cropped a little, but absolutely no photoshopping. (via BizarroBlog) 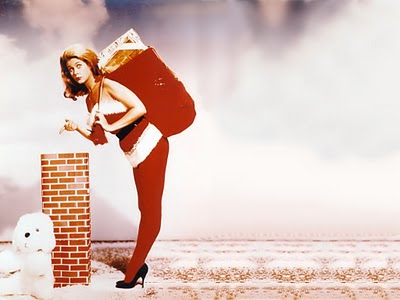 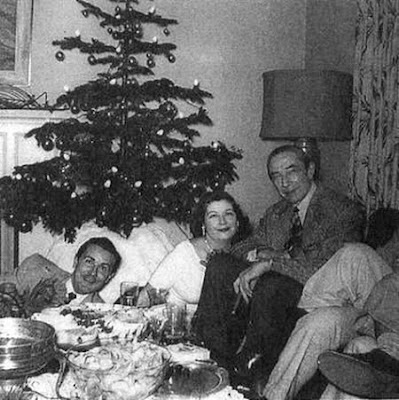 Ed Wood and Bela Lugosi wish you a merry christmas. 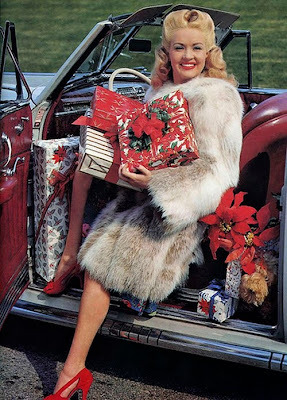 Betty Grable has some pressies for us. 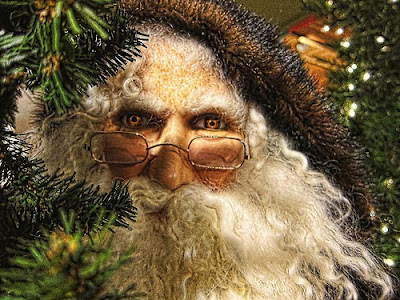 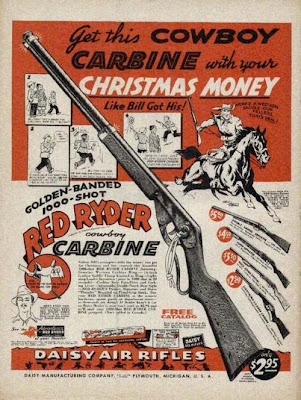 Merry Christmas, God Jul, to all you out there!!!
Here's a little Xmas gift for you all, Ho Ho Ho! Jimmy Dean's Christmas (zip): http://www.megaupload.com/?d=DKOQ56JG 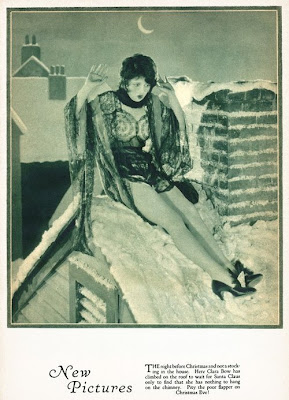 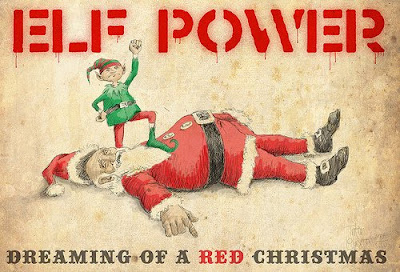 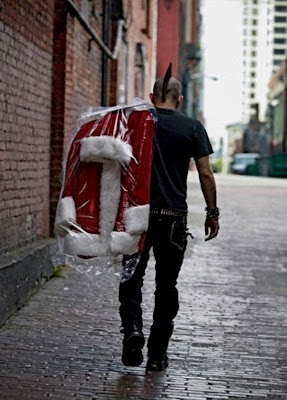 Yes, Virginia, there IS a Santa Claus – 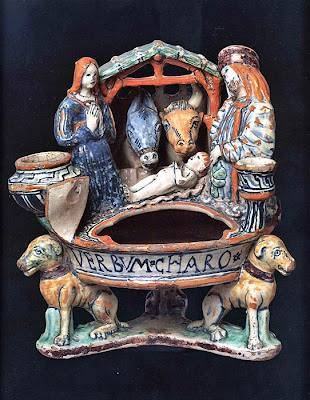 This terra cotta inkstand c1500 from Colle Val d'Elsa is pictured in the superb coffee table book published to celebrate the opening of the new V & A Medieval & Renaissance Art gallery in December 2009. 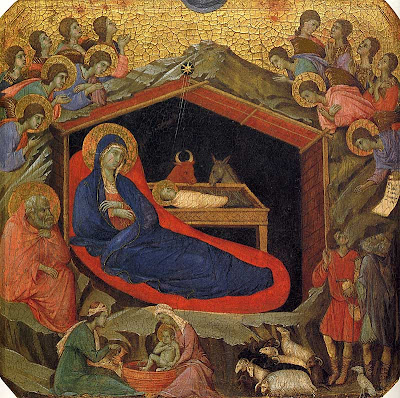 This predella panel from the front side of Duccio's Maestà (c1310) is in the National Gallery of Art in Washington DC. The bulk of the work is where it belongs, in Siena. 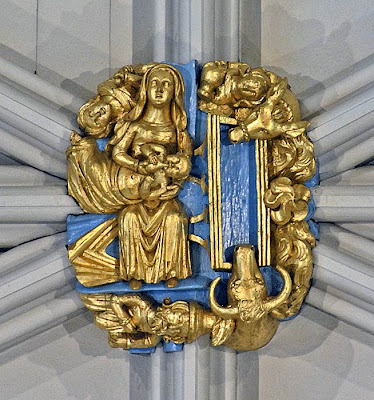 This is a roof boss from the nave ceiling of York Minster (Yorkshire), the largest of Britain's medieval cathedrals. 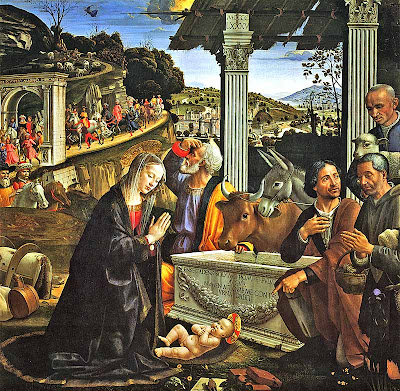 This photo was taken from "Ghirlandaio" by Andreas Quermann - an out of print Könemann monograph which is still around second hand. Domenico Ghirlandaio's 1480s Nativity with himself as shepherd number one opposite a drop dead gorgeous Mary, and Joseph distracted by the clatter of the Magi and their retainers riding over to join in. This is in the tourist free Sassetti Chapel in SSTrinita in Florence, where Ghirlandaio also included Lorenzo de'Medici (twice) and his family plus another self portrait amongst a series of Franciscan episodes.

“A good conscience is a continual Christmas.” –Benjamin Franklin 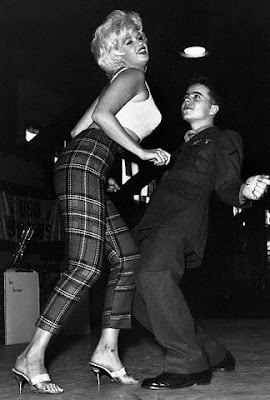 Circa 1961, Newfoundland, Canada — Marine Pfc. Bob Kamineki dances the twist with Jayne Mansfield at the U.S. Naval Station Argentia. Mansfield traveled to the Arctic base with other Hollywood celebrities as part of the Bob Hope Christmas Show. 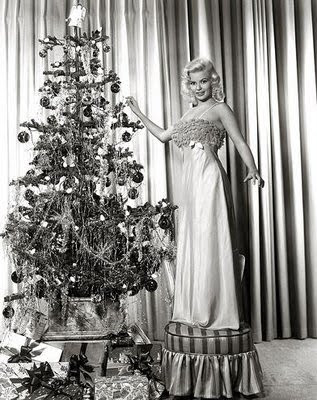 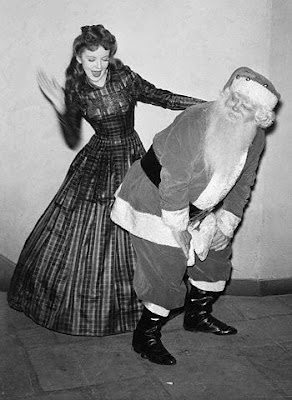 Circa 1942, Hollywood — Ida Lupino, Warner Brothers star, delivers a few wallops to Santa Claus’ spankable rear extremity for, although you would never guess it, that jolly spirit of Christmas is 1,600 years old this December. Miss Lupino, however, just gives him a few for good-measure. 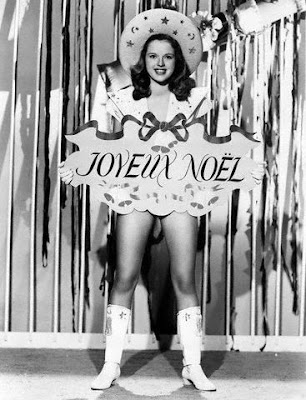 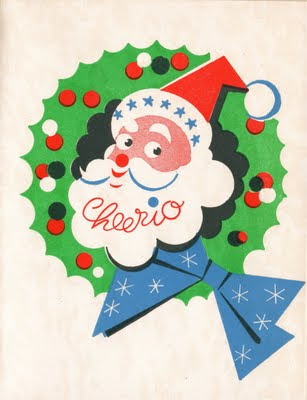