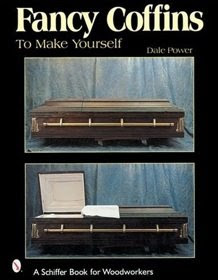 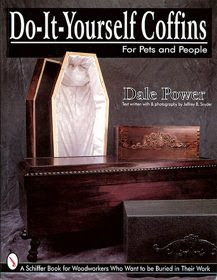 Max Alexander's father and father-in-law died the same month. One received a typical American funeral. The other was a more DIY affair, including a homemade casket. During the course of the two funerals, Alexander learned a lot about the death industry and the resurgence of homebrew funerals. He wrote up his experiences for Smithsonian Magazine. From the essay:
In life both men had been devout Catholics, but one was a politically conservative advertising man, the other a left-wing journalist; you'll have to trust me that they liked each other. One was buried, one was cremated. One was embalmed, one wasn't. One had a typical American funeral-home cotillion; one was laid out at home in a homemade coffin. I could tell you that sorting out the details of these two dead fathers taught me a lot about life, which is true. But what I really want to share is that dead bodies are perfectly OK to be around, for a while....

A movement toward home after-death care has convinced thousands of Americans to deal with their own dead. A nonprofit organization called Crossings maintains that besides saving lots of money, home after-death care is greener than traditional burials—bodies pumped full of carcinogenic chemicals, laid in metal coffins in concrete vaults under chemically fertilized lawns—which mock the biblical concept of "dust to dust." Cremating an unembalmed body (or burying it in real dirt) would seem obviously less costly and more eco-friendly. But more significant, according to advocates, home after-death care is also more meaningful for the living.

"The Surprising Satisfactions of a Home Funeral"
Judging from their Web site, Crossings is a fascinating non-profit organization. They're a clearinghouse of information about home funerals and "green" burials. Apparently, as long as you're not in Connecticut, Delaware, Indiana, Nebraska, New York, it's perfectly legal for anyone to play the role of funeral director. Crossings even run, er, "hands on workshops" to teach you how to deal with the logistics of death at home. I'm not sure whether hands-on means that they provide a practice body or you have to bring your own. From the Crossings Web site:
How is home funeral care different from funeral care by a funeral director?
Funeral care refers to the time between the last breath and final resting - whether that be cremation or burial. Most people hand over this care to a funeral home, but in so doing limit their options to costly, impersonal, and sometimes invasive procedures provided by an emotionally uninvolved funeral director. Home funeral care refers to one's family and friends performing these last deeds of love - including the process of washing, dressing, and laying out their loved one's body....

What about embalming? You may be surprised to learn that embalming is almost nevcr required for the deceased. There are some situations where this is so, such as when out of state transportation is necessary. For the most part, however, embalming is not required and is undesirable due to the highly toxic chemicals used and the invasive procedures required for embalming. Embalming only delays the breakdown of the body, it does not prevent this breakdown. It also denatures the body and artificially changes it at a time when peace and tender handling are most important. Caution: Most funeral directors require embalming if you use their funeral home and choose to have a viewing of the deceased.

Crossings: Caring For Our Own At Death
Oh, and the Do-It-Yourself Coffins and Fancy Coffins books pictured above are real. From the DIY Coffins book description:
All of the tools and techniques needed to produce strong and beautiful coffins are presented here in clear, concise language. Color photographs illustrate every step in the construction of three pet-size and three human-size coffins. Detailed patterns are provided and different box construction techniques are revealed. One box design even doubles as a beautiful blanket chest or coffee table. Once the coffins are built, the discussion turns to the many moldings, appliques, linings, and finishes which may be used to make each coffin unique. A color gallery is also provided. With full color illustrations and detailed instructions, this book is a challenge to the novice and a joy for the experienced craftsman.