BOOK PATROL: Attack of the Beast People, aka The Social-Animals' Parade

A HAVEN FOR BOOK CULTURE

Attack of the Beast People, aka The Social-Animals' Parade 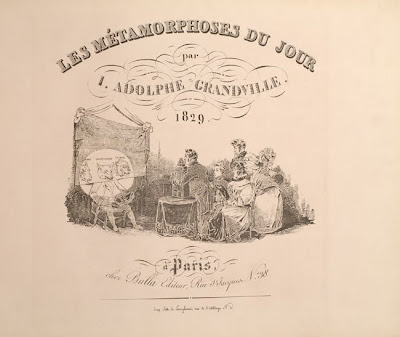 In 1829, the beasts within humanity were exposed and let loose upon an unsuspecting Paris. The onslaught was merciless; no one was spared, not even the clergy. It was a slasher-movie in print - don’t turn that page; somebody is getting ripped to shreds. The book was a killer. The horror was greeted with laughter, though the Church and State experienced sharp pains not associated with split-sides or knee-slaps.Garçon, I’ll have the Metamorphosis du Jour, please, well-seasoned with satire. 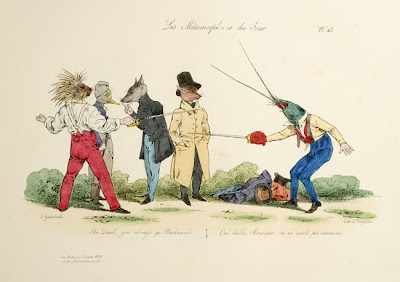 Les Metamorphoses du Jour by J.J. Grandville (1803-1847), one of the most celebrated caricaturists of his era, is amongst the rarest of all color-plate books: Rare in its first edition, scarcer still with its suppressed plates, and exceedingly so in the original wrappers.“The French artist Jean-Ignace-Isidore Gérard went by the name Grandville, which was the stage name his grandparents used. In the early nineteenth-century, Grandville created several hand-colored lithographic books to satirize the bourgeois middle class of Parisian society in the Romantic period. His best, and today the rarest, is Les metamorphoses du jour published in 1829. 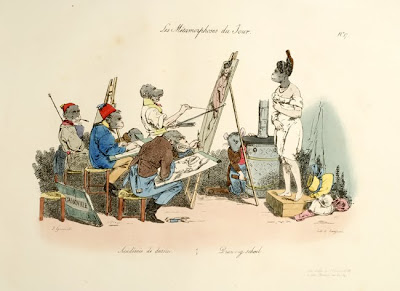 “The characters of the book have a human body and an animal face, exposing people for the beasts they really are. The preface comments that the artist was thereby able to encompass ‘both the living picture of social manners and the satire of institutions and prejudices. Truth can circulate with impunity under the very eyes of the men it attacks.’ 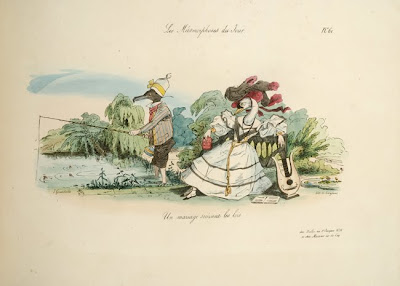 “The first edition was a huge success and quickly went out-of-print. A new edition was prepared in 1854, this time using wood-engraved reproductions of Grandville’s original lithographs. It is unfortunate that most people only know the series through these poor copies.” (Princeton University, Graphics). 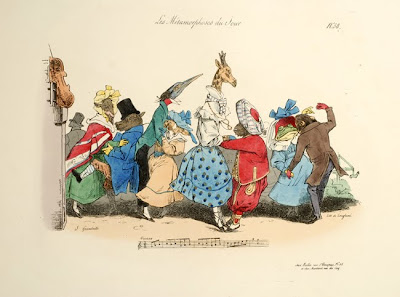 "This famous album, which established Granville's early stye of bitter burlesque, has become rare. Indeed, it is known to many of his admirers only through the greatly inferior album of seventy wood-engraved reproductions published by Harvard in 1854…Lust, gluttony, anger, and the other deadly sins are stigmatized, now with the blow of a hammer, now with the thrust of a stiletto; while the foibles and humors of mankind also receive due attention. Throughout the series Grandville's choice of beast-heads is inspired; and the force of his conceptions and the wit of his captions rarely falter. 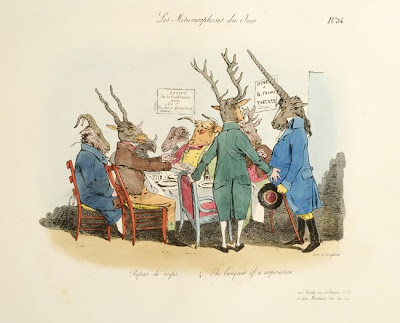 “Occasionally, he produces a design of universal application that calls Goya to mind, as in the bat and owl creatures bewildered by the sunshine of 'The light that hurts them' (no. 12). 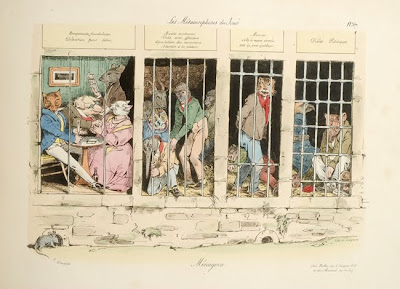 “Perhaps his most terrifying plate is 'Ménagerie (no. 67), which shows four prison cells. In the first are complacent commercial offenders, enjoying all the comforts of home; in the second violent criminals, sly or stupid; in the third murderers, one with a countenance of the utmost ferocity; in the forth, political prisoners, quiet and despondent… 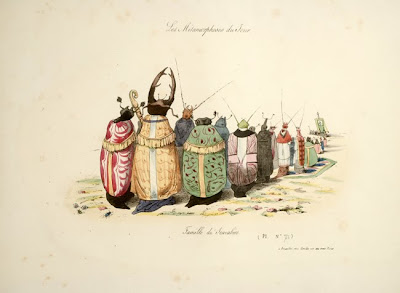 “Granville turned to direct political satire in his final plates, but the publication of his onslaughts on church ('Famille des scarabées' no. 72) and state ('Une bête féroce,' no. 73) was not permitted in France" (Ray). 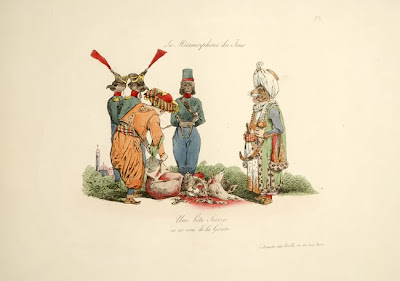 “The most original and the most remarkable work in Grandville's entire oeuvre" (Charles Blanc)”It is tempting to wonder how Grandville, were he alive today, would treat the current cultural and political landscape. What beasts would result from his imagination? What animal, fish, or insect would Lady Gaga, Glenn Beck, members of Congress, religious figures, or any other contemporary star in the cultural and political fundament become after metamorphosis? Heads only; horse’s ass is not a choice.
________GRANDVILLE, J.J. Les Metamorphoses du jour. Paris: Chez Bulla, 1829. Oblong folio. One leaf of letterpress with the Preface by Achille Comte, and seventy-three hand-colored lithographed  plates. Lithographed pink wrappers.Vicaire V, 775-780. Ray, The Art of the French Illustrated Books, 132. Backer 762.