Not to be missed (if you like UK psychedelia): Gary Walker & The Rain - Album No.1 (Superb Psychedelia UK 1968) 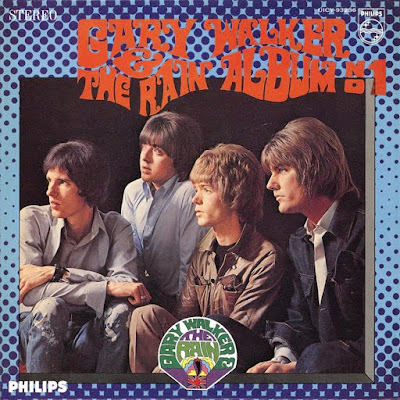 Size: 87.7 MB
Bitrate: 256
mp3
Ripped by: ChrisGoesRock
Artwork Included
Japan 24-Bit RemasterGary Walker (born Gary Leeds, 9 March 1942, Glendale, California) was the drummer, and vocalist with both The Standells and The Walker Brothers.In 1967 he founded Gary Walker and The Rain, which consisted of Joey Molland (guitar and vocals); Charles "Paul" Crane (lead vocals, guitar); and John Lawson (bass guitar).Gary Walker (real name Gary Leeds) was by far the least prominent of the Walker Brothers; nominally the drummer, he apparently played on few if any of the group's records. When the Walkers split in 1967, he formed his own band, Gary Walker & the Rain, which played a far more guitar-oriented brand of pop/rock than his previous outfit. Also including future Badfinger guitarist Joey Molland, the group managed to release an album in Japan in 1968 before splitting in the late '60s. Leeds surfaced again as part of the mid-'70s Walker Brothers reunion.The sole LP by Walker & the Rain is a middling slice of late-'60s British mod-pop/rock with mild psychedelic influences, like phasing and slight guitar distortion. Not at all similar to the balladeering of the Walker Brothers, Leeds deserved credit for trying to reinvent himself within a straightahead rock group, although the results weren't that impressive.Gary formed his own group, Gary Walker and The Rain, in the autumn of 1967. The group consisted of Paul “Charlie” Crane (lead vocals/rhythm guitar/piano), John Lawson (bass), Joey Molland (lead guitar/vocals) and naturally Gary on drums and vocals. Contractual problems prevented Gary from joining John and Scott in the studio during his time with the Walker Brothers. However, as band leader, Gary was the driving force in all of the Rain's recording sessions, contributing as songwriter, vocalist and drummer. Their debut single was a cover of the Classics IV song Spooky released early in 1968. The single release was supported by a lengthy and very successful UK tour with The Kinks, The Herd and The Tremeloes. An extensive tour of Japan followed later that year during which the 'Gary Walker & The Rain Album No 1' was released. The LP was supported by the release of an EP and two singles, all consisting of songs taken from the album. None of the tracks were ever released other than in Japan, consequently the original Japanese LP is now extremely valuable and rare.Review: Gary Walker & The Rain Album No. 1 is a classic album from the late '60s period of Jimi Hendrix inspired psychedelic rock and pop music.The lead-off track, Magazine Woman, features Joey Molland on lead vocals and distorted lead guitar and Paul Crane on piano. John Lawson's bass guitar is prominent in the mix here, as well as during most of the album. The song is similar in style to The Who's Armenia City In The Sky from their "Who Sell Out" LP from late 1967. As a lead-off track for the album, it is rather weak musically and goes on way too long (nearly five minutes). It's hard to imagine how this got released as a single in Japan.The second track, The Sun Shines, is a pretty straightforward song with a bouncy beat that doesn't use any musical gimmicks. This track falls under the Power Pop category. It features most of the group singing together, and has no lead guitar or solo. Joey Molland plays rhythm guitar throughout the entire track.Doctor, Doctor, the album's third track, features an interesting bass line from John Lawson. This song may also be inspired by The Who; a track of the same title written by John Entwistle was released in 1967 as the B-side to The Who's Picture Of Lily. Paul Crane sings lead for most of the track.The 4th track on the CD, I Can't Stand To Lose You, was originally released as the B-side of the Rain's first single, Spooky. It is one of the most commercial sounding tracks on the album, and many critics believe it should have been the A-side, especially in the U.K. where Spooky was a commercial flop on the Pop charts. I Can't Stand To Lose You features Paul Crane's piano playing as the main instrument and has no lead guitar part. Gary Walker's drum fills keep the song's driving beat going without a break.Market Tavern is the story of all the actual people who frequented the pub at 144 York Way as narrated in song by Paul Crane. A phasing effect is used sporadically throughout the track, sometimes applied to the cymbals and sometimes to the entire recording. Joey's guitar licks, played occasionally during the song, are played straight, without any distortion or effects.Track 6 is the first of three cover versions on the album. Spooky was recorded as the first single and was an American hit at the beginning of 1968 (also peaking at #3) on the Imperial label by the Jacksonville, Florida pop band, Classics IV. It has now become a perennial Halloween classic. Gary Walker & The Rain's version is a straight copy of the hit version featuring Paul Crane's smooth lead vocals, making this into a #3 song in Japan. To faithfully reproduce the original version of the song, this song required a rhythm/lead guitar line-up, rather than piano/lead guitar, and of course, added on top of all of this is the "spooky" keyboard part. In place of the original sax solo is Joey Molland's fairly simple guitar solo. In my opinion, this version is superior because of the overall better sound & vocals, despite the missing saxophone.The next track, Take A Look, is another Joey Molland composition. This is one of the highlights of the entire album, with its catchy guitar hook and group h 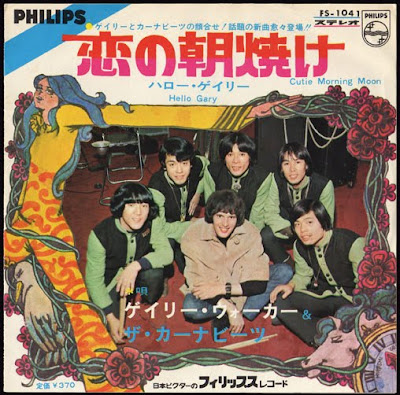 armonizing. It's just a shame that this is also the shortest track. The instrumentation here features a second guitar again instead of the piano.The View, a Gary/Joey collaboration, is another album highlight, with another excellent Crane lead vocal and some tasty guitar licks from Joey. This song documents the scene where a man is contemplating suicide from a 13th floor ledge of a building. The instrumentation here sounds the same as the previous track.Track 9 is my favorite on the album. If You Don't Come Back is a psychedelic, Jimi Hendrix inspired cover of The Drifters recording of this little known Leiber & Stoller composition, which was originally issued on the "Under The Boardwalk" LP in 1964. John Lawson does an amazing job singing this in the same style as The Drifters, and Joey Molland expands the length of the original song by jamming with the band for several minutes, making generous use of controlled guitar feedback [The original song had no solo and was only 2:39]. The song also allows Gary to demonstrate his drumming abilities.Track 10 is another narrative type song like The View and another Gary/Joey collaboration, this time sung by Joey. The lyrics tell the tale of a sad old man's life. Unfortunately, Thoughts Of An Old Man is one of the weakest and most uninteresting tracks musically by Gary Walker & The Rain. The piano is featured here again, in place of a second guitar.Francis, track 11 on the LP, is a group composition. The song really rocks out, with Joey playing his best Eric Clapton guitar licks, and is probably the best song that the group self-penned. It's hard to believe that this ended up on the B-side to their final release in January of 1969, Come In, You'll Get Pneumonia, which was a huge flop in the U.K. Francis is a "Can't Buy Me Love" type song about a rich womanizer who can't get himself a wife.The following track is the lightest sounding of the entire LP and borders on Bubblegum music, probably the most extreme change in styles you're ever going to hear from one track to the next on any album. Paul Crane's, I Promise To Love You, features harpischord as the main instrument and a rhythm track of piano and acoustic guitar.Finally, the end of the album brings us to the third cover version on the album, Gary Bonner & Alan Gordon's composition, What Ever Happened To Happy? Bonner & Gordon are well known for writing The Turtle's biggest hit, Happy Together. Two versions of this song were issued early in 1968, one by female singer, Jackie DeShannon and the other by San Francisco group, the Mojo Men. Being a more "Folkie" type of song, this track features acoustic guitar, finger snaps, and hand claps.Overall, Gary Walker & The Rain Album No. 1 is a very diverse album as far as musical styles, and probably has at least one song that appeals to everyone, whether you like straight rock, psychedelic rock, power pop, light pop, or folk.
--== Gary Walker in The Rain ==--
*Gary Walker: (drums and vocals)
*Paul “Charlie” Crane (lead vocals/rhythm guitar/piano)
*John Lawson (bass)
*Joey Molland (lead guitar/vocals)Singles:
"Spooky" (Middlebrooks/Shapiro) / "I Can't Stand To Lose You" (Gary Walker/Paul Crane) - Polydor 56237 / Japan: Philips SFL 1150 – January 1968 (Produced by Scott Walker)
"Come In You’ll Get Pneumonia" (Vanda/Young) / "Francis" (Leeds/Molland/Crane/Lawson) - Philips BF 1740 - 1969
"The View" (G Leeds/J Molland) / "Thoughts Of An Old Man" (G Leeds/J Molland) – Japan only: Philips SFL 1174 - 1968
"Magazine Woman" (J Molland) / "Take A Look" (J Molland) – Japan only: Philips SFL 1740 – 1968Album No. 1 – Japan only release: Philips SFX 7133 - 1968:
01. "Magazine Woman" (Joey Molland) [4:55]
02. "The Sun Shines" (Paul Crane) [2:46]
03. "Doctor Doctor" (Joey Molland) [2:56]
04. "I Can't Stand To Lose You" (Gary Leeds/Paul Crane) [2:25]
05. "Market Tavern" (Joey Molland/Paul Crane) [4:02]
06. "Spooky" (Middlebrooks/Shapiro) [3:00]
07. "Take A Look" (Joey Molland) [2:06]
08. "The View" (Gary Leeds/Joey Molland) [2:49]
09. "If You Don't Come Back" (Leiber/Stoller) [6:44]
10. "Thoughts Of An Old Man" (Gary Leeds/Joey Molland) [2:42]
11. "Francis" (Gary Leeds/Joey Molland/Paul Crane/John Lawson) [3:02]
12. "I Promise To Love You" (Paul Crane) [3:03]
13. "What Ever Happened To Happy" (Bonner/Gordon) [2:16]1. http://rapidshare.com/files/372118711/Gary_Walker.rar
or
2. http://www.upload-drive.com/file/7449/Gary-Walker-rar.html
or
3. http://uploadmirrors.com/download/1SOGT5QW/Gary_Walker.rarI upload my albums just for you so i would be very glad for a album review by you in comments section:
http://cgrblogger.blogspot.com/2010/04/not-to-be-missed-if-you-like-uk.html
.
Posted by cgrblog at 05:02
Labels: Gary Walker and The Rain