BECAUSE READING IS FUNDAMENTAL...

Executed Prisoners of the Ohio Penitentiary 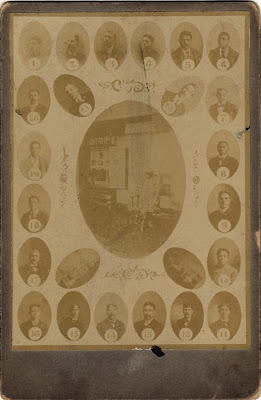 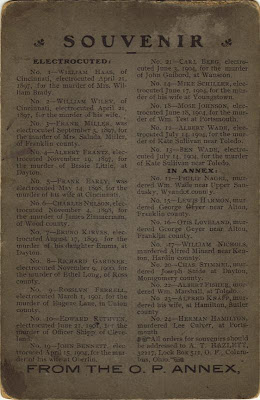 Here's some info. from the seller's description:1. WILLIAM HAAS - First person legally electrocuted in the history of Ohio. Known as the “boy murderer”. He raped Mrs. William Brady, slashed her throat and lit her house on fire. (Cincinnati, Hamilton County) 2. WILLIAM WILEY - Killed his wife, while seemingly possessed by the devil himself in an insane rage. Electrocuted minutes after Haas in a double execution, the stench still in the air. Prison official drew lots to see who would die first. (Cincinnati) 3. FRANK MILLER - A man from Poland who murdered his employer’s wife by crushing her skull with an axe. (Columbus) 4. ALBERT FRANTZ - The Dayton murderer who killed his pregnant fiance, Bessie Little, after having betrayed her. He pulled his horse carriage to the Miami river, shot her and dumped her body over the side. (Dayton) 5. FRANK EARLY - Cincinnati premeditated wife-murderer. She “sank to the floor a corpse “ after he fired a bullet into her right eye. It took six applications of electricity before he was pronounced dead. (Cincinnati) 6. CHARLES NELSON - negro who murdered a Wood County grocer, James Zimmerman, to satisfy the whims of an immoral woman. Was an expert banjo player of death row. (Bowling Green) 7. BRUNO KIRVES - murdered his beautiful Christian daughter while drunk by blowing off her head with a shotgun. (Dayton) 8. RICHARD GARDNER - Raped and murdered an eleven year old Ross County girl, Ethel Long. To make his fiendish deed possible, he used his knife after the manner of the Cæsarian atrocities. He then slashed her throat. (Austin) 9. ROSLYNN FERRELL - Murdered his best friend, Eugene Lane, in Union County to secure money for the woman he loved. Got the chair instead of a wedding. (from Columbus) 10. EDWARD RUTHVEN - A robber who killed Cleveland police officer, Shipp. His wife was his codefendent and she made a fantastic escape from the Ohio Penitentiary. 11. JOHN BENNETT - killed his wife by pouring carbolic acid down her throat and pounded her head with a brick until it was a shapeless mass. (Oberlin) 12. CARL BERG - youngest person killed in the chair at 18. Killed John Guibord of Wauseon. Was defended by Ham & Ham and Files & Paxon to no avail. 13. MIKE SCHILLER - Murdered his wife in Mahoning County. Literally disemboweled her with a knife. Showed signs of life twice after being electrocuted. (Youngstown) 14. MOSES JOHNSON - jealousy of his white mistress and liquor caused him to kill William Test at Portsmouth. He had to be jolted FIVE times. The stench of burning flesh made witnesses deathly sick. 15. ALBERT WADE - One of the notorious Wade Brothers of Lima Ohio. Electrocuted for complicity in the murder of Kate Sullivan of Lucas County Ohio. Both brothers died in the chair’s second double execution.16. BEN WADE - Killed an old woman in Toledo along with his brother during a robbery. His last words were, “Now boys, don’t burn me up. I want to be a respectable looking corpse.” 17. CHARLES STIMMEL - killed a Dayton coal dealer named, Joseph Shide. Defended by Attorney Egan of Dayton. His last words were: “I want the world to know that the curse of a dying man rests on Sheriff ------- of Dayton. I want it distinctly understood that I never killed nobody. Now go on with your dirty work.” 18. ALFRED KNAPP - The “STRANGLER” of Hamilton Ohio. Killed four woman before being executed. Killed his wife, Hannah Goddard Knapp. Also killed Emma Littleman when she declined his marriage proposal. Killed May Eckert. Also another wife, Jennie C. Knapp died by his hands. 19. ALBERT FISHER - murdered William Marshall of Toledo. Professional thief. Tormented the other condemned men and wondered who would go to hell first. 20. LEWIS HARMON - Accidentally shot George Geyer near Columbus during a burglary with other ex cons. 21. OTIS LOVELAND - Died for compliciity of Franklin Co. farmer with Harmon. 22. WILLIAM NICHOLS - An african american Civil War veteran and former slave. Oldest man ever executed at the OP. at the age of 65. Born into slavery. Killed best friend in Hardin Co. near Kenton. 23. HERMAN HAMILTON - died for killing foreman, L. Culver at Portsmouth for money.One man photograph on this card is of a man that was never executed: Phillip Nagel who had been convicted of the murder of William Wade near Upper Sandusky, Wyandot County. His death sentence was commuted to Life Imprisonment in 1905 by Ohio Governor, Myron T. Herrick.