The Arthurmag Blog has been posting scans of documents produced by & about the San Francisco Diggers, from SF's Haight-Ashbury district, dating from late 1966 through 1967. Of course, this same sort of thing went on in other cities across the US a year or two later. Back in '68 or '69 in Dallas, I was a 14/15 year old alienated kid looking for some sort of something to grab onto. On one or two occasions, I went downtown & bought some wholesale Dallas Notes underground newspapers & tried to sell them on the street & at school. I got hassled by the cops on the street & sent to see the principal at school. I was lucky to break even & the thrill quickly wore off. I experimented with some drugs & even went down to Lee Park a few times to the Sunday afternoon love-in's; but mainly I went to hear the bands & look at the hippie girls. I missed the infamous "Lee Park Bust" when confrontations & arrests occurred.

Gradually in high school, I became even more alienated & turned off by the hippies, after it seemed everyone at my school was turning into one. I just withdrew into my own world of listening to music & hanging out with a group of guys who were real outcasts at school, but bound by our love of obscure rock 'n roll bands that no one else at our school had heard of.

This is an on-going series of posts from Arthur & I will add some additions to the series on this blogposting page at a later date...

POSTED BY Jay Babcock
JUL 12, 2009
Diggers Papers No. 1: The Communication Company announces its presence/mission in Haight-Ashbury, 1967

Arthur is proud to present scans of essential documents produced by and about the San Francisco Diggers, who were in many ways the epicentral actors in the Haight-Ashbury during the epic, wildly imaginative period from late ‘66 through ‘67. The Diggers’ ideas and activities are essential counter-cultural history, sure, but they are also especially relevant to the current era, for reasons that should be obvious to the gentle Arthur reader.

Most of the documents that we are presenting here are broadsides originally published on a Gestetner machine owned and operated in the Haight by the novelist Chester Anderson and his protege/sidekick Claude Hayward, used the name “Communication Company,” or more commonly, “ComCo.” In this first broadsheet, probably distributed sometime in January, 1967 along the Haight on telephone polls, walls, and in windows, ComCo announces its presence, and its mission. Click on the image below to see it at full-size… 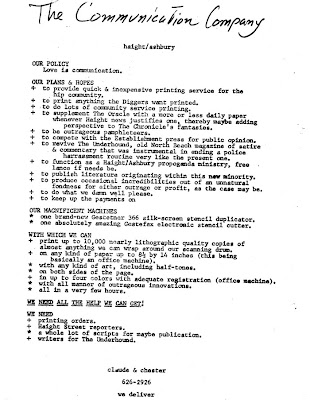 This particular scan is from a copy of the broadsheet that Chester had mailed to a friend, explaining what he was up to in San Francisco, having recently moved there from New York. That’s Chester’s handwriting near the top and the right: “This I didn’t write but it explains a lot.”

This sheet was distributed in late January, 1967 along the Haight on telephone polls, walls, and in windows, like all ComCo broadsides. 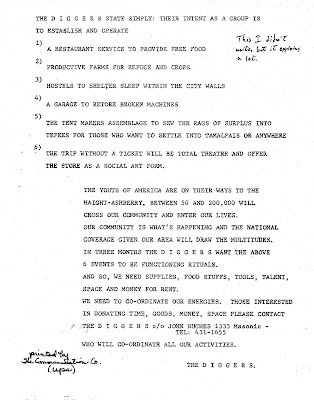 JUL 14, 2009
Diggers Papers No. 3: “Storm Warning”
.
..This sheet was distributed on February 3, 1967 along the Haight on telephone polls, walls, and in windows, like all ComCo broadsides. 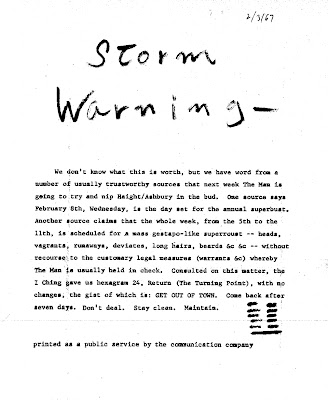 ...This sheet was distributed on February 5, 1967 along the Haight on telephone polls, walls, and in windows, like all ComCo broadsides. It is a direct follow-up to “Storm Warning”, issued on February 3, 1967. 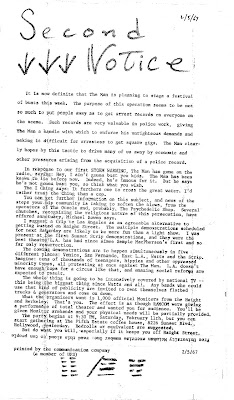 This double-sided document was probably printed and distributed in early February, 1967. Click on the images below to see this document at full size. Sorry for the crap quality of these scans—we’re working on getting better ones.

...This sheet was probably distributed after February 6, 1967 along the Haight. It would seem to be a direct follow-up to earl;ier broadsides warning of a “festival of busts” that the cops were supposedly planning (see “Storm Warning”, “Second Notice”). Evidently some folks got busted anyway...

What we have here are two posters advertising the January 14, 1967 “Human Be-In” at Golden Gate Park, which featured a principal Digger—poet/dancer/visionary Lenore Kandel—on the stage. Following the posters is a write-up for the event by journalist/novelist/poet Chester Anderson, who was new to town and new to the Diggers. I’m not sure if this document was ever published, and it’s not a “Diggers” document per se, but it’s an evocative piece of writing about the day, and representative of how the Diggers were thinking about the free, public events they were bringing into reality. 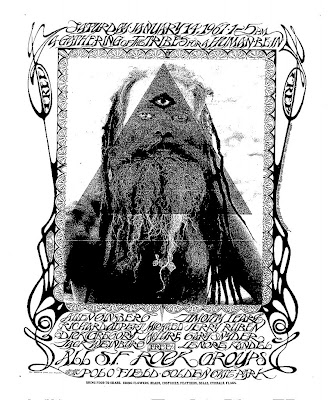 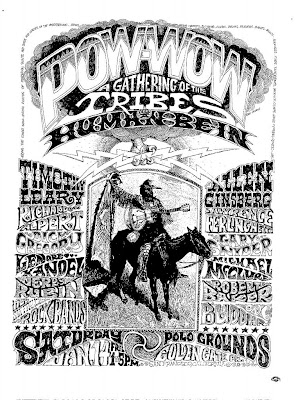 ...In this January 14, 1967 broadsheet, probably distributed along the Haight on telephone polls, walls, and in windows, Anderson passes on some learned tips on good Bay Area headventure trips. 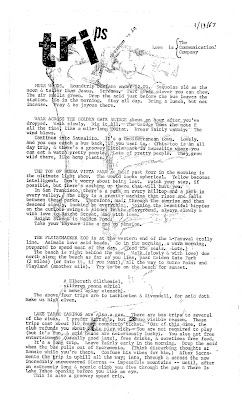 ...What we have here was part of a set that were distributed en masse (500 copies) along the Haight on telephone poles, walls, in windows, and so on, on January 28, 1967. Chester wrote these pages, and apparently sent copies to a friend or family member with handwritten text explaining some of the terms, and it’s one of those papers that we’re showing here. 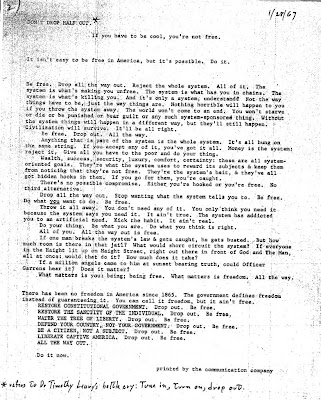 ...According to Claude, these broadsides were then “handed out on the street, page by page, super hot media, because the reader trusted the source, which was another freaky looking hippie who had handed it to him/her.”

The two scans below are from Chester’s collection—that’s his handwriting on the top of the first page. The authors are unknown, the pub dates are unknown: late January 1967 is our best guess. 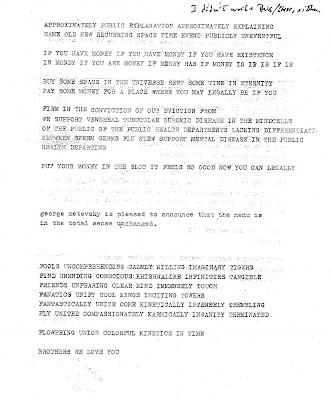 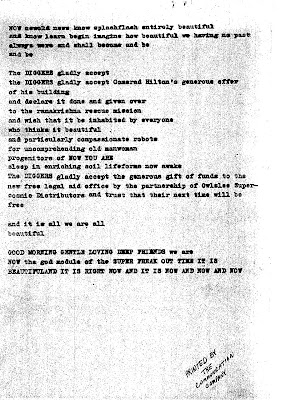 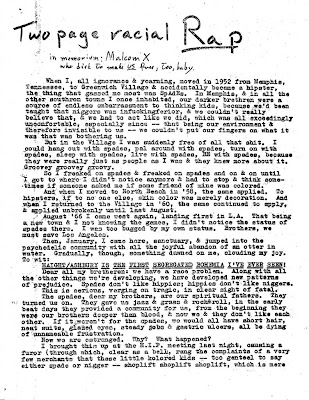 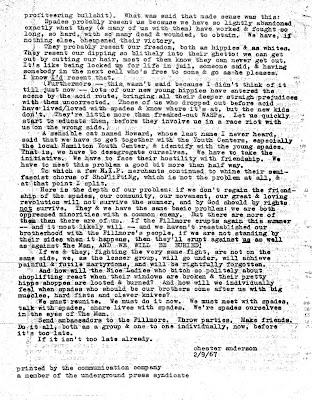 ...Here’s a copy of one broadside published by Com/Co in early February, 1967. This is from Chester’s collection, but as he notes in handwriting at the top of the page, he did not author it. This was one of at least three sheets circulating during the time that encouraged SF heads to head to L.A. for the weekend. 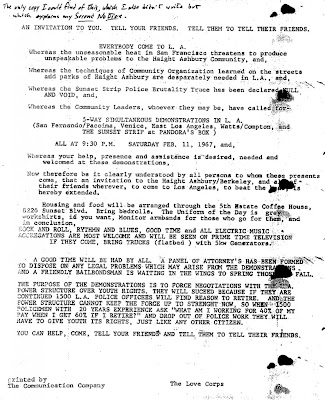 AUG 3, 2009
The Diggers Papers No. 13: “Buena Vista Park is Middle Earth” (a poem by Chester Anderson for John Fahey)

...Here’s a scan of a broadside published and distributed by Com/Co on February 8, 1967. Note: Chester was gay, perhaps bisexual, from what I’ve been told by people who knew him. 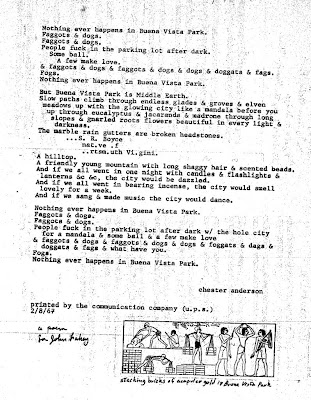 ...Here are two posterish images—the black and white one is an early poster by Victor Moscoso—plus two flyers to do with the Invisible Circus, a “community” that was supposed to last for 72 hours at the Glide Memorial Church one weekend in late February, 1967. More on what happened at the Invisible Circus in our next installment of The Diggers Papers… 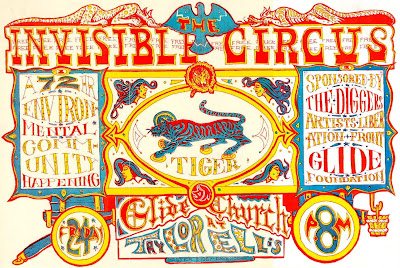 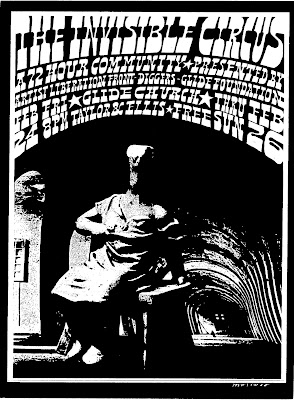 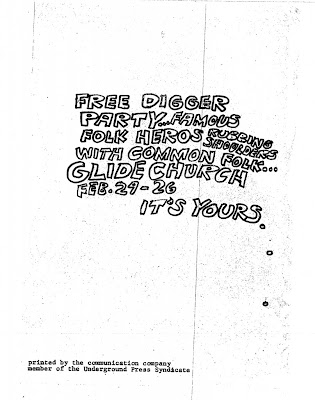 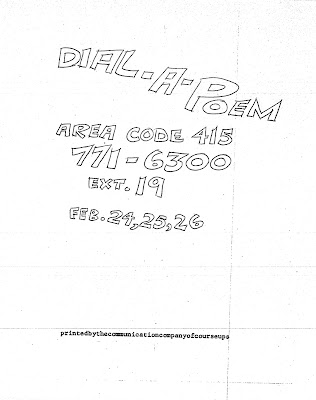 Arthur is proud to present scans of essential documents produced by and about the San Francisco Diggers, who were in many ways the epicentral actors in the Haight-Ashbury during the epic, wildly imaginative period from late ‘66 through ‘67. The Diggers’ ideas and activities are essential counter-cultural history, sure, but they are also especially relevant to the current era, for reasons that should be obvious to the gentle Arthur reader. (ESPECIALLY this one!)... 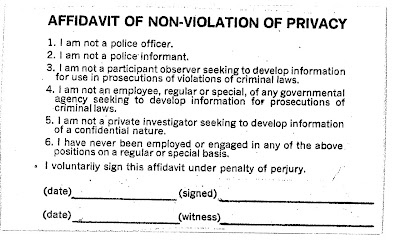 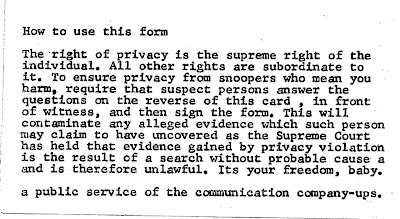 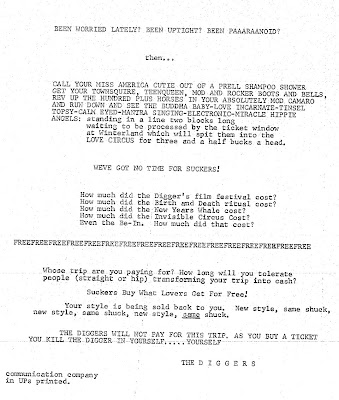 ...This particular Com/Co document is a flyer/poster/broadside by a pre-fame Robert Crumb advertising BEDROCK ONE, a March 5, 1967 event organized by Anderson himself. Check out that lineup, a real who’s who of the contemporary Haight-Ashbury arts/life scene: the Steve Miller Band, the Orkustra (the band led by guitarist Bobby Beausoleil, who would later be associated with both Kenneth Anger and Charles Manson), poet Richard Brautigan, the infamous street agitators San Francisco Mime Troupe, the San Francisco League for Sexual Freedom, the Lysergic Power & Light Company, and more. 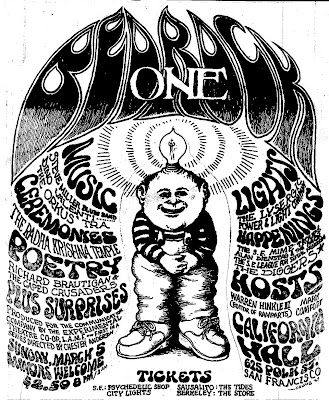 ...This particular Com/Co document is a flyer/poster/broadside by an unknown artist advertising BEDROCK ONE, a March 5, 1967 event organized by Anderson himself... 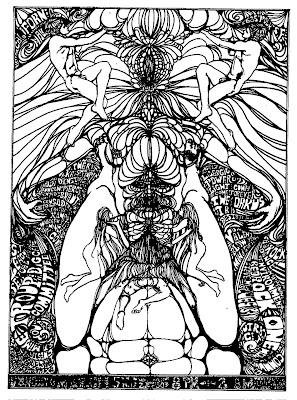