Duster Bennett - Out In The Blue (featuring Peter Green)

Duster Bennett - Out In The Blue 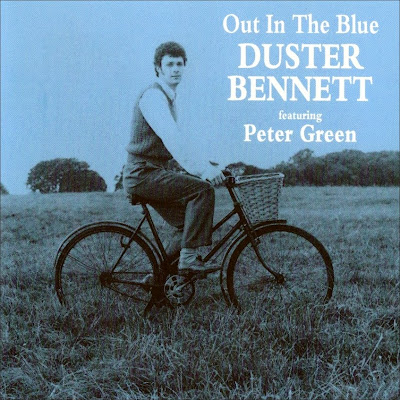 Duster Bennett (Anthony Bennett, 1946-1976) was a British blues singer and harmonica player. He signed to Mike Vernon's Blue Horizon label in 1967 and was backed on his debut album, Smiling Like I'm Happy (1968), by members of Fleetwood Mac. He was a session harmonica player and a member of John Mayall's Bluesbreakers. He was killed in a car accident in 1976.

Odds and ends, mostly from 1966-68, with a few tracks from 1975 and 1976, the year Bennett was killed in a car wreck. Two tracks feature fine lead guitar by Duster's longtime friend (and original Yardbird) Top Topham -- home tapes worthy of inclusion if only for Top's amazing and expressive vibrato. Five tracks feature Peter Green, including a demo of his "Trying So Hard to Forget" that's especially moody and the fascinating snippet "Two Harps" instrumental duet (unaccompanied harmonicas, as the title implies), showing the similarity in the pair's harp styles. The final cut, "Everyday," from 1976, sets one of Bennett's finest vocal performnces against a string backdrop. What a contrast to the one-man band shouting "Worried Mind" and it works. AMG

(Click on link at top to download at original muddy Sava blogposting)
Posted by T. Tex Edwards at 3:19 PM