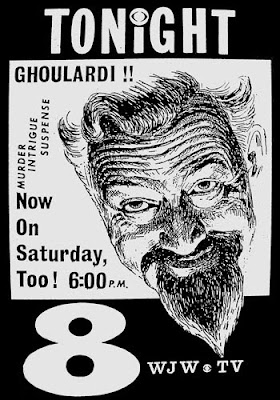 Here’s a compilation I made a looooonnnnngggg time ago. I decided to dust it off and share it here. It is a cd I put together using songs Ghoulardi played on his show back in the 60’s.

The songs were culled from The Psychotronic Video Magazine, as well as the Ghoulardi book that came out back in ’97.

It’s hard to sum up Ghoulardi in a few sentences but here’s what you need to know. Ghoulardi was a character created by the brilliant voice over artist Ernie Anderson (ever heard the radio trailer for FROGS? That’s him!) back in the 60’s. He hosted a show called SHOCK THEATER on WJW in Cleveland that showed horror movies. Ghoulardi wore outrageous attire, spoke in a language that “parents just didn’t understand”, played crazy music and did little things like blow up action figures during the breaks from the movies. Movies included; THE MONSTER AND THE GIRL, THE BRAIN EATERS, and THE BRAIN FROM THE PLANET AROUS. Kids ate it up.

It was television, so anything could have happened. The execs at the station were terrified at what he might say or do on any given show. But since his ratings were so great, they kind of let him do his thing.

Lux Interior was quoted once as saying; “When Ghoulardi was on T.V. crime went down!” Presumably because all the J.D.’s stayed home to watch his show!

For more info on Ernie Anderson/Ghoulardi check out GHOULARDI: INSIDE CLEVELAND’S WILDEST RIDE by Tom Feran and R.D. Heldenfels.

I included a few sound samples of Ghoulardi doing his thing from back in the day. There were downloaded off of the internet at the time I made the cd.

“Cool it with the boom booms!”

POSTED BY KOGAR THE SWINGING APE AT 12:51 PM

(Click on link to go to Kogar's original blogposting for DL)
Posted by T. Tex Edwards at 5:30 PM