Hello neighbors!! On this page I`ll be posting county music (or music that influences country music) from my collection of 78`s LP`s and 45`s. Most of what I`ll have here will be from about 1900 up into the 1950`s or so. I`ll try to use stuff that is not currently available to buy. All artists I`ll be posting recorded before 1950, but some recordings may have been made later than 1950. I hope you all enjoy what I`ll be putting one here!! 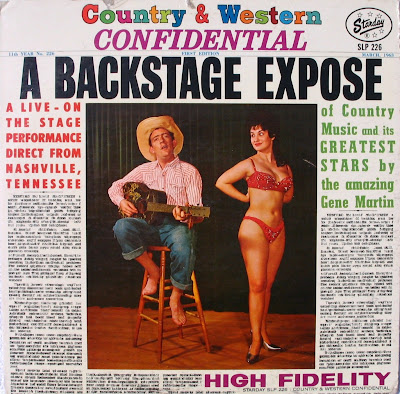 Here is sort of a rare record. Gene Martin doing a comedy record. "Who is Gene Martin?" you may be saying right now. Gene was Benny Martin`s brother. He was a good guitar player and had what I`d call just a good plain country voice. I don`t really know any particulars on him except in the 1960`s and into the mid 1970`s he played rhythm guitar in Roy Acuff`s Smoky Mountain Boys (seems I have posted a lot of Smoky Mountain Boy related stuff lately). He also done some solo stuff with Roy on the shows. Also, he done a few comedy type numbers and sang duets with whatever girl singer Roy was using at the time, such as June Stearnes.
On this record, he does comedy almost entirely with impersonations of big country artists. Most of the tracks are pretty funny to me. He pretty much hits a bulls-eye with most of the impersonations too. 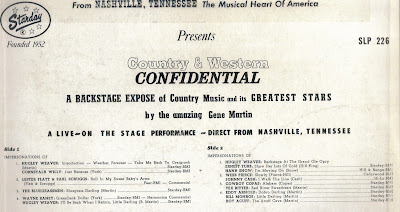