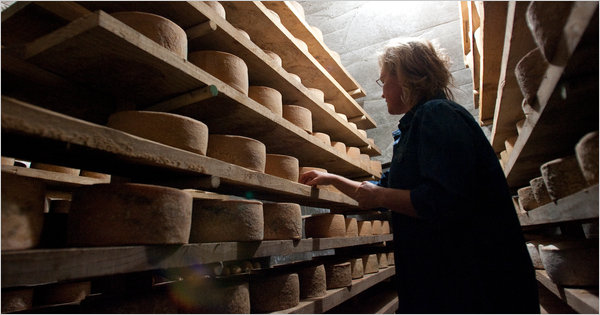 Kelli Estrella, a farmer and award-winning cheesemaker, has become a symbol in a national debate over how much the government should regulate small farmers. More Photos »

Go to your Portfolio »

And now Kelli Estrella, a farmer and award-winning cheesemaker whose pastureland is tucked into a bend of the Wynoochee River here, has become a potent symbol in a contentious national debate over the safety of food produced by small farmers and how much the government should regulate it.

To her devotees, Ms. Estrella is a homespun diva of local food. With her husband and six adopted children from Liberia, she makes tasty artisan cheeses from the milk of her 36 cows and 40 goats and sells it at farmers’ markets.

Some even winds up on tables at fancy restaurants in Manhattan and Los Angeles.

But to the federal government, Ms. Estrella is a defiant businesswoman unable to keep dangerous bacteria out of her products. Last month, the Food and Drug Administrationmoved to shut down her business, Estrella Family Creamery, after tests found listeria in some of her cheese and she refused to agree to a broad recall of her products.

Although no illnesses have been linked to Ms. Estrella’s cheese, listeria is a sometimes deadly bacteria that is especially hazardous for the very young and the very old. Pregnant women who become infected can have miscarriages or stillbirths.

Issues of food safety and small food producers were at the fore in Washington, D.C., this week as senators struck a deal that would exempt small producers from some of the rules that would be imposed by a sweeping food safety bill. A vote is expected after Thanksgiving on the long-awaited legislation.

“They really need to go after the industrial producers,” said Senator Jon Tester, Democrat of Montana, who pushed for the exemption. “The level of risk is far less with the little guy than it is with the big guy.”

There is fuel for all sides in Ms. Estrella’s predicament: it shows that even food from a revered artisan producer can pose risks, while demonstrating the pitfalls for regulators who may be viewed as heavy-handed.

Ms. Estrella’s case has drawn visceral reaction from foodies because the allegations threaten a core belief of what has come to be known as the locavore movement: that food from small, local producers is inherently better and safer than food made by large, faceless corporations. Her supporters cast her as a David fighting a two-headed Goliath of Big Food and Big Government.

“She’s an incredible craftsperson and one of the best cheesemakers in the country,” said Tia Keenan, a New York restaurant consultant who specializes in cheese. “The laws regarding food safety are really meant to regulate large-scale, corporate, industrial food production, and small food producers really suffer under those guidelines.”

Federal and state regulators, meanwhile, say they have very real concerns about the safety of cheese, especially softer varieties like brie and mozzarella that are more likely to harbor listeria. The F.D.A. began in April to test soft-cheese makers for listeria, visiting 102 facilities, large and small, and found the bacteria in 24 of them. While the list of facilities where listeria was found included some large factories, more than half of the makers were artisanal producers.

Regulators say that safety, not size, is what’s important.

“When you’ve got people that make good cheese, you want them to be successful,” said Claudia Coles, the food safety program manager for the Washington State Department of Agriculture. “But our first premise is, we don’t want people marketing an unsafe product.”

William Marler, a Seattle food safety lawyer, said it was clear that regulators tried to work with Ms. Estrella and that he was puzzled by the attitude that Ms. Estrella’s supporters appear to have toward the F.D.A. “I just don’t know how they make the leap from the government trying to do the right thing for public health to ‘they’re food Nazis in the pocket of big agribusiness.’ ”

At least nine artisan cheesemakers have had recalls this year. Most involved listeria in soft cheeses, but this month, a California cheesemaker, Bravo Farms, recalled a gouda, a semi-hard cheese, from Costco stores after it was linked to an E. coli outbreak that sickened 37 people.

Artisan cheese is made by hand in small batches, often using raw milk that is not pasteurized to kill bacteria (raw-milk cheeses must be aged 60 days to make them safer). In recent years, the number of artisan cheesemakers has grown rapidly. Washington State now has 34, up from about 18 in 2005. Vermont, another hot spot, has 48, up from 27 in 2005.

Ms. Estrella’s problems began in February, when state tests found listeria in her cheese and throughout the farm building where she makes and ages it. The bacteria was even in a humidifier that officials said blew it around the facility. Ms. Estrella recalled some cheese and did a vigorous cleaning and renovation.

Go to your Portfolio »

But in August, F.D.A. inspectors again found the bacteria in her facility and cheese. In early September, they asked her to recall all of her products.

Ms. Estrella said no, a rare act of defiance by any food maker. She argued that the F.D.A. had found listeria only in her soft cheeses and that hundreds of wheels of hard cheese were safe. She estimated the value of the cheese the government wanted destroyed at more than $100,000.

Last month, the F.D.A., which does not have the power to order a recall (the food safety bill in the Senate would give it that authority), went to court, saying the “persistent presence” of listeria meant all of Ms. Estrella’s cheese should be considered contaminated. In response, a federal judge sent marshals to effectively impound the cheese, preventing her from doing business.

The F.D.A. declined to discuss Ms. Estrella’s case because of the litigation. But a spokeswoman, Siobhan DeLancey, said, “When we find a pathogen in a facility, especially one that can kill or cause miscarriages, we’re going to take action.”

Ms. Estrella plans to fight back in court.

“Where’s the balance here?” she said on a recent afternoon as she stood in one of the aging rooms on her farm, surrounded by wheels of cheese she is forbidden to sell. “Let’s work together. Let’s not just put cheesemakers out of business.”

She says she believes that the F.D.A.’s crackdown is part of a larger campaign against raw milk, and she is fighting for her customers’ right to eat whatever they choose. “I don’t think this issue is about bacteria and it’s not about cheese,” she said. “I think that we’re losing our freedom.”

The F.D.A. said it was not targeting artisan cheesemakers or those who use raw milk, and its listeria testing had included producers across the spectrum.

While cheesemakers acknowledge the need for good sanitation, some supporters question the agency’s approach.

“If the F.D.A. wanted to shut down the U.S. artisan cheese industry, all they’d have to do is do this environmental surveillance and the odds of finding a pathogen would be pretty great,” said Catherine W. Donnelly, co-director of the Vermont Institute for Artisan Cheeseof the University of Vermont, referring to the listeria testing at cheese plants. “Is our role to shut these places down or help them?”

Ms. Estrella has received support from loyal customers, retailers and other artisan producers. Fueling that support is the fact that no cases of illness have been linked to her cheese.

Dr. Anthony Marfin, Washington State’s epidemiologist for communicable diseases, said it was possible the contamination was relatively low, so no severe illnesses were reported. Mild listeria infections can cause flulike symptoms or nausea.

But he said that once the organism was in a food, it could grow to harmful concentrations.

Kurt Beecher Dammeier, owner of Beecher’s Handmade Cheese, an artisan cheesemaker and retailer in Seattle, said the F.D.A. needed to work harder to understand artisans like Ms. Estrella. “The F.D.A. comes from an industrial, zero-defect, highly processed, repeatable perspective, and she comes from a more ancient time of creating with what she gets,” he said. “I’m not sure they can really even have a conversation.”

A version of this article appeared in print on November 20, 2010, on page B1 of the New York edition.