JUST FOR YOUR LISTENING PLEASURE 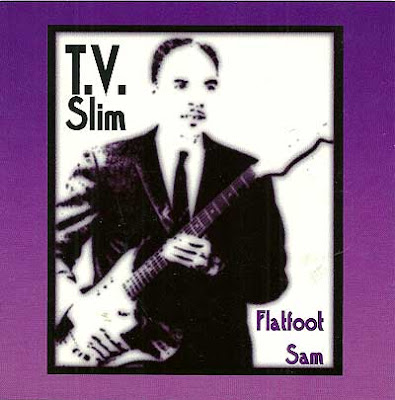 Born Oscar Wills, 10 February, 1916, Houston, Texas. Died 21 October, 1969, Kingman, Arizona
A musician since the late 1930s, Oscar Wills was resident in Louisiana in the fifties, singing blues and playing guitar (also harmonica, though not on record). His main influences were DeFord Bailey and Sonny Boy Williamson (II) on harmonica and Guitar Slim and Elmore James in the guitar domain. Wills was not recorded until he set up his own label, Speed Records, in the mid-1950s. By that time he also had his own band, the Heartbreakers, consisting of Mighty Joe Young on guitar, Eddie Williams on piano and Jimmy White on drums. Their first record was the piano- dominated "The Fight" (Speed 6863, 1955). Wills never was a full-time musician ; he was chiefly occupied running a television repair shop. This gave him his nickname, T.V. Slim, which is the label credit on all of his Speed recordings.
Wills's brief moment in the spotlight came in 1957. He had written an uptempo song called "Flat Foot Sam", about an unfortunate soul who was "always in a jam". Mira Smith from Shreveport , the owner of Ram Records, had just set up a new label, Clif Records, in partnership with Cliff Hagen. "Flat Foot Sam" was first recorded for Clif (# 103), credited to T.V. Slim and his Heartbreakers. It made some noise in the Arkansas-Louisiana-Texas region, mainly due to heavy plugging on the Stan Lewis-sponsored R&B show on KWKH in Shreveport. Thanks to his connections with Leonard Chess, Stan Lewis managed to get the record leased to Chess Records for national distribution. Instead of reissuing the disc right away on one of his labels (Chess, Checker, Argo), Leonard Chess asked Wills if he could go to New Orleans and do a recut of "Flat Foot Sam" with Cosimo Matassa's Studio band. This second, much improved version was recorded in June 1957, with prominent roles for Robert Parker on tenor sax and Charles 'Hungry' Williams on drums. It was released in August on Argo 5277, under his own name, Oscar Wills. While the Clif release showed the song's writer as Clara Wills (probably Oscar's wife), writer's credit on the Argo single now went to O. Wills and S. Lewis. This was a fairly common practice at Chess : the artist / songwriter had to share the publishing with someone who would give the record exposure, Stan Lewis in this case. Why Leonard Chess still decided to reissue the Clif version on Checker 870 (in the same month as the Argo remake) is a mystery to me. Ironically, Billboard gave the original version of "Flat Foot Sam" a higher rating (77) than the Argo single (75). (Issue of August 26, 1957.)
As Wills had only recorded one song during the New Orleans session, the other side had to be filled by another artist. This became the instrumental "Nervous Boogie" by Paul Gayten, who had produced the June session. The two sides were almost too good to be on the same disc. In the end it was "Nervous Boogie" that generated the greatest demand, enough for a peak position of # 68 on the Billboard pop charts in December 1957. You won't find "Flat Foot Sam" in the index of any Joel Whitburn book, but it still was a good seller on the back of "Nervous Boogie" and has achieved the status of a minor rock n roll classic. There were rockabilly-styled cover versions by Tommy Blake on Sun and by Earl Reed's Rhythm Rockers on Cherokee (vocal by Johnny Scoggins) and in later years "Flat Foot Sam" was recorded by the Blues Band, Mickey Murray, Jim Byrnes, Hank Mizell, Mike Morgan, Brian Setzer, Terry Hanck and Bill Wyman's Rhythm Kings. Mike Sanchez includes the song regularly in his live set. There even exists a group in Connecticut called Flat Foot Sam and the Educated Fools. Check them out (on Spotify, for instance), their music isn't bad at all. The song spawned two sequels, "Flat Foot Sam Met Jim Dandy" (aka "Flat Foot Sam Made A Bet") and "Flat Foot Sam Is Back", this time credited to T.V. Slim. He continued to record for his own Speed label, also after relocating to California in 1959. The second half of the 1960s saw further releases on tiny West Coast labels : Excell, Timbre, Pzazz (owned by Paul Gayten), and Ideel. One of my favourites is "T.V. Man" (Excell 104, 1966), about his experiences as a television repair man. Sadly, Oscar Wills died in a car crash in Arizona while returning from a gig in Chicago, on October 21, 1969. He never became a household name, but he had a powerful voice, played a mean guitar, and displayed humor in his songwriting. (Black Cat Rockabilly)