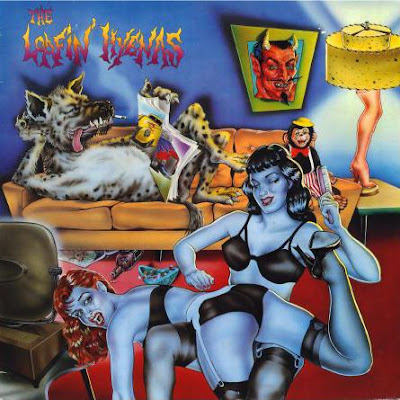 Yet another part-time Austin resident : T.Tex Edwards. His most famous outfit ("Pardon me, I've got someone to kill" with Out On Parole) is a record with a strange destiny. First released in 1989 on Sympathy, at the same time on New Rose. The latter french label added 4 more tracks on the CD version. Saustex Media has re-released it lately with an extra bonus song, unavailable all these years.
In the mid 80's Texan Troubadour Tex rode to California where he joined the Loafin' Hyenas (not to be confused with Chicago's Laughing Hyenas - several records on Touch & Go), some kind of supergroup including Click Mort (early Cramps guitarist) and Rob 'Graves' Ritter (Gun Club bassist). They issued two singles on Sympathy but their posthumous full-length was released on New Rose in 1990. Strictly applying the "garage-swamp-rock'n'roll-blues for dummies" code (a crossing-line between the Cramps, the Gun Club and Beasts Of Bourbon), this record is a must have.
A brief note about Long Gone John's Sympathy For The Record Industry : moving from Long Beach CA to Portland OR, the man got dizzy unpacking the giant boxes and put SFTRI for sale. No official buyer. Few weeks ago all SFTRI products have been removed from each e-store (itunes, amazon, emusic etc). So if you own a SFTRI record, keep it safe, sell it at a highly price on eBay or share it kindly (depending on your greed or your heart). So long Long Gone John & thanks for the ride.