"Hugh Colin Hopper (born 29 April 1945 - 7 June 2009) was a progressive rock and jazz fusion bass guitarist. He was a prominent member of the Canterbury scene, as a member of Soft Machine and various other related bands

Early career:
Starting in 1963 as bassist with The Daevid Allen Trio, alongside drummer Robert Wyatt, he alternated between free jazz and rhythm and blues. In 1965 with his brother Brian, Robert Wyatt, Kevin Ayers and Richard Sinclair he formed The Wilde Flowers, a pop music group that never released any records during its existence, but spun off into two other influential Canterbury scene groups, Soft Machine and Caravan..." 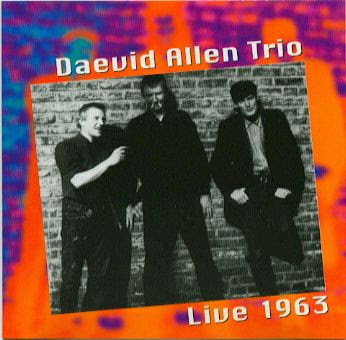 (DL ON ORIGINAL BOGPOST LINK)
"This disc features one of the earliest line-ups of The Soft Machine playing at the Marquee Club in London (where The Who would soon make their reputation). The music is not easy listening by any means and can only be recommended to die-hard fans of Canterbury groups. The liner notes feature fond reminiscences by Daevid Allen and gentle caveats by Hugh Hopper. Despite the occasionally amateurish playing and musical pretensiousness of the group members (at the time of this recording they claimed to be strictly jazz fans), the disc is an important historical document and should be seen as such. Parts of the songs appear in later Gong recordings, and Daevid Allen continues reciting poetry and anecdotes between songs during his live performances. "
*Info en español, aca.

(READ THE Wiki LINK FOR THE IN-BETWEENS, BUT HERE ARE THE FACTS OF DEMISE)
"...Hopper was diagnosed with leukemia in June 2008 and underwent chemotherapy. As a result of his illness and the treatment, he canceled all his concert appearances. A Hugh Hopper benefit concert took place in December 2008 at the 100 Club in London and featured In Cahoots, members of Soft Machine Legacy, Delta Sax Quartet, Sophia Domancich and Simon Goubert, Yumi Hara Cawkwell, and the Alex Maguire Quartet. Another benefit was planned for late June 2009. [5] He married his partner Christine on 5 June 2009 and died 7 June."


(ADDENDUM 6/14 -- THE INDEPENDENT HAS FINALLY RUN AN OBIT & RETROSPECTIVE) 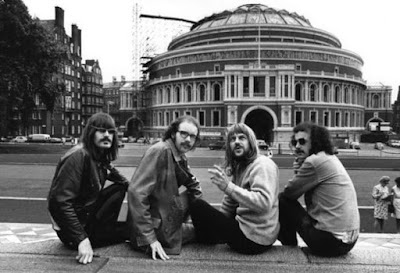 Hopper with Soft Machine outside the Royal Albert Hall before a gig with the London Symphony Orchestra in 1970: (L-R) Mike Ratledge, Hopper, Robert Wyatt and Elton Dean (GETTY)

The bass guitarist and composer Hugh Hopper was a pivotal member of Soft Machine, the Canterbury group which went through many incarnations and shifts in musical identity and proved more successful in continental Europe than the UK in the late Sixties and early Seventies. A friend and schoolmate of the founder-member, drummer and vocalist Robert Wyatt, Hopper contributed to the group's psychedelic debut in 1968 and was their road manager before replacing bassist Kevin Ayers on the jazzier Volume Two album the following year. Hopper was a mainstay of the Softs until May 1973, his trademark fuzz Fender Precision bass riffs and experiments with tape loops as important to the group's ever-evolving sound as Mike Ratledge's Lowrey electric organ through five albums, including the best-selling Third (1970) and Fourth (1971).

Having issued 1984, his first solo album, in 1973, Hopper left the Softs and worked with the Japanese percussionist and composer Stomu Yamash'ta and the American keyboard-player and composer Carla Bley, and was involved in the influential jazz-rock bands Isotope and Gilgamesh. But he remained best known for his association with the Canterbury scene in general, and Soft Machine in particular, and played in several groups with former bandmates and associates such as Soft Heap, Soft Works, Soft Bounds and Soft Machine Legacy, as well as with European admirers and like-minded spirits in Hopper Goes Dutch or Hugh Hopper's Franglodutch Band.

Born in 1945, Hugh Hopper was the son of a book-keeper and a piano-playing psychiatric nurse. The couple encouraged the musical pursuits of Hugh and his older brother Brian; they attended St Stephens School and then Simon Langton School For Boys in Canterbury, alongside Ratledge and Wyatt. The friends sang in the school choir and developed a common passion for classical and avant-garde music and jazz. Hugh was the keenest rock'n'roll and rhythm'n'blues fan and played clarinet, piano, his mother's acoustic guitar and his brother's electric guitar before saving up to buy a Höfner electric bass. They were joined by Daevid Allen, an Australian beatnik, and Ayers, a "colonial" teenager who had been in and out of various boarding schools.

In 1962, Hopper, Wyatt and Allen formed the Daevid Allen Trio. Despite appearances at Peter Cook's Establishment Club, the Marquee club and the ICA, their jazz and free-form poetry didn't fit the mood of the time and they broke up. Two years later, Hopper spent time in Paris with Allen. "That was an important time for me. It was the first time I took acid and got into tape loops," Hopper told Graham Bennett, the author of Out-Bloody-Rageous, the Soft Machine biography.

In 1964, Hopper, his brother Brian – who had taken up the saxophone – Ayers, Wyatt and guitarist Richard Sinclair started The Wilde Flowers. They made their debut at Whitstable in January 1965, playing Chuck Berry, Beatles and Kinks covers as well as versions of John Coltrane and Thelonious Monk jazz tunes and original compositions such as "Memories", "Have You Ever Been Blue?", "Don't Try To Change Me" and "I Should Have Known" by Hopper, who swapped his newly acquired Burns Bison for a Fender Precision bass and came up with the then unusual idea of the group performing their hour-long set without pause to encourage non-stop dancing, originating what would later become known as the "famous Soft Machine head-down medley."

In 1966, however, when Wes Brunson, a rich American acquaintance, decided to bankroll a group featuring Allen and Ayers, who recruited Wyatt and Ratledge, Hopper decided to stick with the Wilde Flowers until summer 1967, and that autumn he became Soft Machine's road manager. By then, they had lost Allen and were one of the happening groups in London, playing hip venues like Middle Earth alongside Pink Floyd, and were managed by Chas Chandler and Mike Jeffery, who also looked after Jimi Hendrix.

Hopper put up with two gruelling tours of the US in 1968 with the Softs bottom of the bill to Hendrix, driving huge distances with their equipment while the musicians flew to the concerts. "I think I only carried on because I knew it couldn't get any worse. It did, of course," mused Hopper who received $100 a week plus expenses for the back-breaking work.

At the end of the first tour, the Soft Machine recorded their eponymous debut at the Record Plant in New York. It featured three Hopper compositions, "Why Am I So Short?", with lyrics by Wyatt, "A Certain Kind" and "Box 25/4 Lid", an instrumental written with Ratledge on which Hopper played bass. He quit as roadie during the second US tour and was asked to step into Ayers' shoes when Probe, the band's American label, demanded a second album. His first appearance with the Softs was in February 1969 at the Royal Albert Hall for a Rock Proms concert, again with Hendrix topping the bill. "We did a run-through for the sound check and all the other musicians who were standing around clapped. That had never happened to the band before," he recalled.

Hopper's presence meant a shift towards improvisation and a jazzier approach with unusual time signatures, though it was Ratledge who suggested he use a fuzz box. "The pieces Mike had written for Volume Two needed the contrapuntal bass parts to sound as strong as the keyboard and not just as background," explained the bassist, who also played alto saxophone and acoustic guitar and composed several tracks including the album's stand-out "Dedicated To You But You Weren't Listening". "We were going back to the jazz thing, and I was very influenced by Frank Zappa. Our heroes were more jazz men than rock musicians," said Hopper.

In 1969, the Softs played on Ayers' Joy Of a Toy album and overdubbed two tracks on The Madcap Laughs, the first solo album by the former Pink Floyd mainman Syd Barrett. "He didn't even tell us how it went. We just had to listen to it until we had some idea," Hopper recalled. The Softs toured Europe again, building on their 1967 reputation when they had been the darlings of the French underground. "There was plenty of nervous tension in the band. We were irresponsible young men in charge of powerful machinery. The music was played incredibly loud," admitted Hopper. With Elton Dean on alto saxophone and saxello, Third, the 1970 double set, featured four 20-minute pieces, including Hopper's "Facelift", recorded live but reworked with loops in the studio.

Soft Machine were moving further away from the Dadaism and pataphysics of their early days towards a more austere, instrumental jazz fusion, and by the time they recorded Six, Hopper said, "I was starting to get bored." Hopper made 1984, an experimental album loosely inspired by George Orwell's novel and influenced by Riley's sound collages, and left before Six appeared in the shops. "I hadn't really been enjoying playing for some time. I wasn't really interested in the music the other guys were interested in," he said. His place was taken by Roy Babbington and Soft Machine continued for another six years.

Hopper was happier guesting on Wyatt's sublime Rock Bottom album (1974), leading his own Hoppertunity Box project and working with Richard Sinclair, pianist Keith Tippett and others. He stopped playing for a few years and drove a taxi in Canterbury. In 1984, he wrote The Rock Bass Manual and returned to music with renewed enthusiasm, issuing a further 20 albums, including Jazzloops (2002).

Diagnosed with leukemia a year ago, Hopper stopped touring; he was grateful for the benefit concerts organised at the 100 Club in London and in Whitstable last December. A similar event in France later this month will become a tribute to him. With his receding hairline, horn-rimmed glasses and grey moustache Hopper looked like a university professor. He was philosophical about his success in Europe. "I get these German journalists asking me about the 'Canterbury music school'," he said. "With hindsight, I'm sure it sounds like a great place."