Underground Classics - The Transformation of Comics into Comix 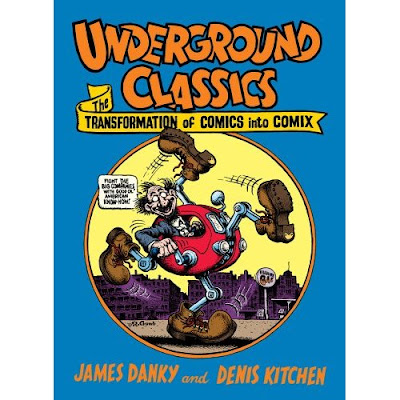 I get about three or four review books in the mail every day. Very few interest me, but once in a great while I get a gem of a book, and Underground Classics - The Transformation of Comics into Comix is one of them.

There have been a few histories of underground comics as of late, but this is the first one to really focus on the artwork of underground comics, as opposed to their cultural significance, which most histories cover. That's not to say the book doesn't look at the era in which these comics were made -- it does, but it's first an foremost an art book.

Most of the pages are devoted to high quality scans of original art by all the usual suspects -- R. Crumb, Rand Holmes, Vaughn Bode, Robert Williams, William Stout, Art Spiegelman, Gilbert Shelton, Trina Robbins, Jay Kinney, and the rest.I love seeing the zip-a-tone, blue lines, and white-out that you don't get to see in the printed comics. I have a lot of the comics this art came from, and it's a treat to see it presented with such great attention to detail. Each illustration is accompanied by enlightening commentary.

The book is edited by Denis Kitchen and James Danky, co-curators of the exhibition of underground comics at the Chazen Museum of Art, University of Wisonsin-Madison that this book is based on.

Underground Classics - The Transformation of Comics into Comix