LIFE AT THE D & A DOG RANCH
MUSINGS FROM A SOUTH AUSTIN MALCONTENT WHO LIVES WITH THE DOGS (MOBY AND LUNA) WHO HAVE CHOSEN HIM TO HANG OUT WITH.

Ok, got an email from my good friend Dr. Bruce who wanted to make sure that I knew Milton Berle also had a propensity for whipping out his elongated third leg at a moments notice. My brain being a font for useless knowledge, I of course already knew this and figured everyone else already did as well.
However the other fellow he mentioned raised my radar and really made me happy. 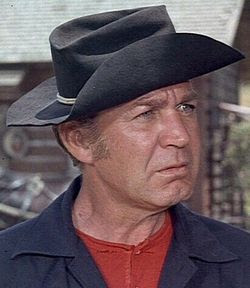 FORREST TUCKER!!!!! Yes, that Forrest Tucker of F Troop fame. He is reported to have a large joint as well that he was more than proud to show off.

Here is a little info from Mamie Van Doren:

Hollywood sexpot of the 50's and 60's Mamie Van Doren talks about Forrest Tucker, and others on her website - click Bedtime Stories. No pics tho. Here's what she said about Mr Tucker.

My old friend, the late Forrest Tucker was rumored to have one of the biggest cocks in Hollywood. He was a tall, good-looking guy with blond hair and a great tan even in his mid-sixties, and it wouldn't have been surprising. Forrest and I were in a show back in the mid-1980's, and after a performance one night we took a limo to a Polynesian restaurant for drinks and dinner. On the ride to the restaurant, I asked him if all the rumors were true and he told me the following story.

Forrest and another actor were drinking at Slapsy Maxy's, a famous Hollywood watering hole back in the 1940's owned by the prizefighter, Slapsy Maxy Rosenblum. On this evening everyone got pretty well oiled and there was considerable bragging about sexual exploits. It finally got down to the size of their penises. The argument got more and more serious, and by closing time, money started getting thrown on the bar and a sizable bet was made. Slapsy rummaged around under the bar and came up with a ruler, and the contestants unzipped to settle the matter then and there.

"I pulled mine out, Mamie," Forrest told me while the limo driver strained to hear from the front seat, Aand it was between eleven and twelve. I thought I had the bet won! Then this guy who could not have been more than five feet three or four hauled his out..."
He paused for effect. "And? And?" I asked.

"And it hung over the end!"

He grinned. "Never underestimate those short guys. It was George Raft."
Posted by T. Tex Edwards at 3:30 PM