Amplify’d from www.independent.co.uk
See this Amp at http://amplify.com/u/bs0yj
Posted by T. Tex Edwards at 11:19 AM No comments:

Amplify’d from blogs.dallasobserver.com
See this Amp at http://amplify.com/u/brw6f
Posted by T. Tex Edwards at 4:17 AM No comments:

Amplify’d from www.tshaonline.org
See this Amp at http://amplify.com/u/brw40
Posted by T. Tex Edwards at 3:30 AM No comments:

>> Tales From The Crypt

Matt Sullivan, "'There's A Highway Telling Me To Go': The Mystery of Jim Sullivan"

Andy Zax, "The Highly Improbable (But Utterly True) Saga Of Tupper Saussy: 'LearnTo Pronounce It; You May Need To'"

Amplify’d from www.empsfm.org
See this Amp at http://amplify.com/u/brpbu
Posted by T. Tex Edwards at 2:10 AM No comments:

In 1966 ten New York artists and thirty engineers and scientists from Bell Telephone Laboratories collaborated on a series of innovative dance, music and theater performances, 9 Evenings: Theatre & Engineering, held in October at the 69th Regiment Armory in New York City.

In the souvenir program for the first performance Cage writes a statement about the piece: "My project is simple to describe. It is a piece of music, Variation VII,indeterminate in form and detail, making use of the sound system which has been devised collectively for this festival, further making use of modulation means organized by David Tudor, using as sound sources only those sounds which are in the air at the moment of performance, picked up via the communication bands, telephone lines, microphones together with, instead of musical isntruments, a variety of household appliances and frequency generators.
The technical problems involved in any single project tend to reduce the impact of the original idea, but in being solved they produce a situation different than anyone could have pre-imagined.

Variations VII, performed at 9 Evenings, was the next to last in John Cage's series of indeterminate works that he had begun in 1958, which made increasing use of electronic equipment and systems.

*Copyright Disclaimer Under Section 107 of the Copyright Act 1976, allowance is made for "fair use" for purposes such as criticism, comment, news reporting, teaching, scholarship, and research. Fair use is a use permitted by copyright statute that might otherwise be infringing. Non-profit, educational or personal use tips the balance in favor of fair use.

"Variations VII by John Cage" EXCLUSIVELY DISTRIBUTED by Microcinema DVD. To order this DVD and/or other Microcinema titles, go to: www.microcinemadvd.com.

In 1966 ten New York artists and thirty engineers and scientists from Bell Telephone Laboratories collaborated on a series of innovative dance, music and theater performances, 9 Evenings: Theatre & Engineering, held in October at the 69th Regiment Armory in New York City. The artists were John Cage, Lucinda Childs, Öyvind Fahlström, Alex Hay, Deborah Hay, Steve Paxton, Yvonne Rainer, Robert Rauschenberg, David Tudor and Robert Whitman. Archival material has been assembled into ten films, each of which reconstructs the artist's original work and uses interviews with the artists, engineers and performers to illuminate the artistic, technical and historical aspects of the work.

Variations VII, performed at 9 Evenings, was the next to last in John Cage's series of indeterminate works that he had begun in 1958, which made increasing use of electronic equipment and systems. This DVD documents the only complete performance of Variations VII and also presents a stereo audio recording of the full 85 minutes of the performance. This rare and historical film is the second in the 9 Evenings series from E.A.T. and ARTPIX and was produced by Billy Klüver and Julie Martin of E.A.T. and directed by Barbro Schultz Lundestam.


Posted via email from up against the flooring 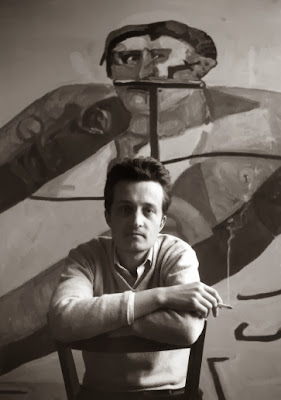 Eugen Schönebeck, c. 1965
Eugen Schönebeck was born in Heidenau near Dresden in 1936. In 1954, he enrolled at the College of Applied Arts in East Berlin. He left the German Democratic Republic in the following year for West Berlin to study at the city’s Academy of Fine Arts. In his years at the academy from 1955 to 1961, he became familiar with the more recent developments in European art and showed himself impressed by the works of Nicolas de Staël, Jean Fautrier, Henri Michaux, Wols, Hans Hartung, and others. 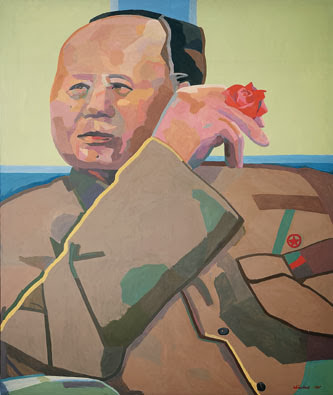 Eugen Schönebeck, Mao-Tse-tung, 1965
In 1957, he made friends with Georg Baselitz. An intense exchange of ideas about art ensued, which was to last for five years. Shortly after the publication of “Pandemonium II – Manifesto”, a poster-sized leaflet with texts by both artists, their collaboration found an end in 1962. Schönebeck had already turned his back to gestural painting at that time and gradually come to the conclusion that art had to be pointing a way forward. In Pandemonium II, he and Baselitz had called for a new art which was to detach itself from the prevailing abstract painting of Art Informel and Tachisme. This was how they hoped to open up a new approach to reality. “I regard the abyss of sincerity as a raison d’être, a bestiary, an entire life, an inner swelling force", Schönebeck emphasized in the “Manifesto”. 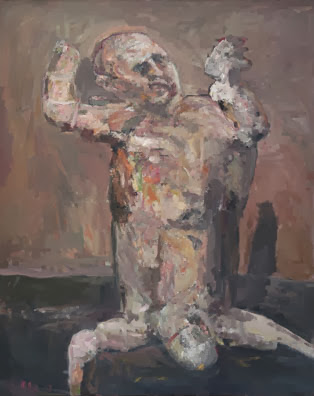 Eugen Schönebeck, Tortured Man, 1963
Schönebeck’s paintings and drawings from that time show mutated beings that seem to float between the world of the dead and the world of the living – fragmented and torn, oscillating between abstraction and figuration. The painting “Tortured Man” (above) describes a ghastly slaughter. We see the mutilated limbs of a man whose intestines are spilling to the floor. 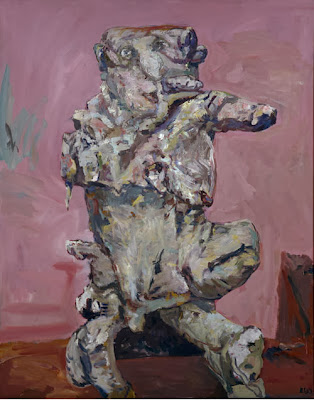 Eugen Schönebeck, Ginster, 1963
These often grotesque works by Schönebeck draw on the childhood of the artist, who was only nine years old when the war was over, but still remembers the disfigured bloated corpses floating in the Elbe River and the German hordes marching through the destroyed scenery in and around Dresden. Schönebeck's and Baselitz's pictures were among the earliest works by German postwar artists giving form to the traumatic loss of belief in the lasting values of Fatherland and family. 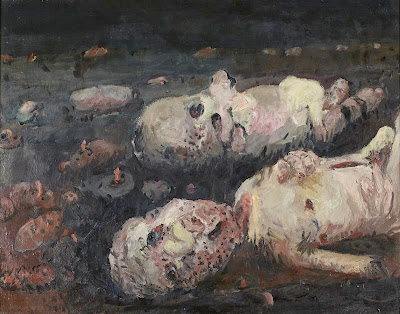 Georg Baselitz, Acker, 1962
Schönebeck broke an explicit taboo with these pictures. In a manner more radical than his colleagues dared embarking on, he began giving a face to the dismantling of the pride in a German identity that was based on the crimes of World War II. Günter Grass, who enrolled at the Academy of Fine Arts to study sculpture in 1953, later remarked in regard to those years that “arts ran the risk to drift off into the non-committal . . . the non-representational triumphed. Whether here or over there [in the German Democratic Republic]: who reflected circumstances in his pictures, was at loggerheads with reality, was dismissed by the jury.” 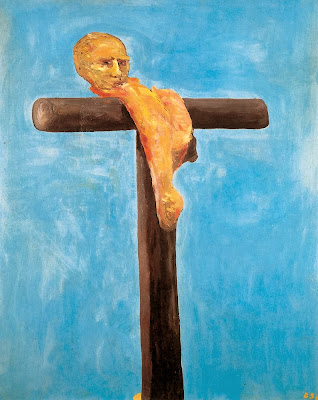 Eugen Schönebeck, Crucifixion, 1963
From 1963 on, Schönebeck, who had left the GDR as an anti-Stalinist and now found himself unable to return to his home country after the construction of the Berlin Wall in 1961, developed a growing political awareness in the confrontation with the European Left. In this atmosphere, he began to explore the subject of crucifixion which until 1964 was to manifest itself in four paintings which cleared a path for figures and colors. With these works, the artist succeeded in proceeding to an aesthetics which he would, within only one year, transform into an unmistakable style that had no real precursors and has remained without followers. 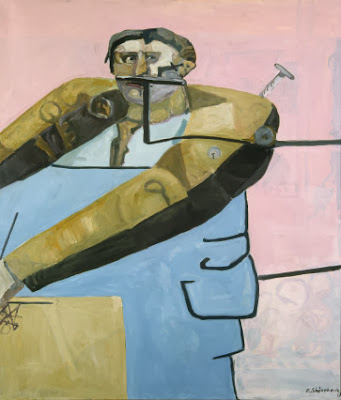 Eugen Schönebeck, True Man, 1964
It was the painting “True Man” (above) that rang in the new style in 1964. Schönebeck made a series of portraits of persons which might be called “Heroes of the East.” These are followed by two pictures showing Lenin and Mao as well as large-size portraits of the Soviet poet Vladimir Mayakovsky, the Russian writer Boris Pasternak, and the Mexican painter and communist activist David Alfaro Siqueiros. For these paintings Schönebeck relied on a flat kind of style which he had learnt in a mural training course in the GDR. 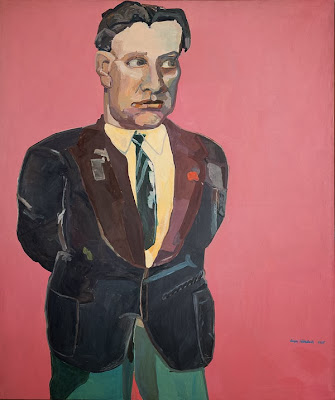 Eugen Schönebeck, Majakowski, 1965
There was no market for such paintings at that time. In 1967, Schönebeck painted his last pictures and withdrew from the art scene.  Though several of Schönebeck's works are to be found in important public collections, he has been largely forgotten among art historians. A current exhibition at the Schirn Kunsthalle in Francfort wants to correct this by assembling almost all his surviving canvases, of which there are about thirty in number, as well as thirty works on paper. 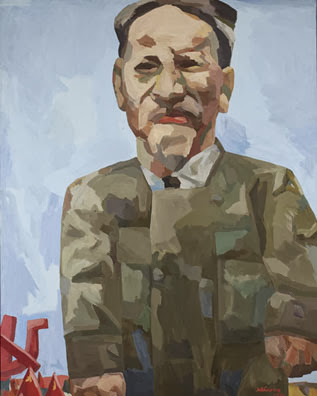 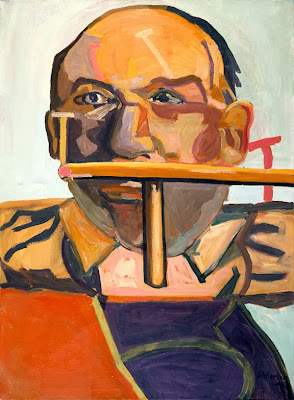 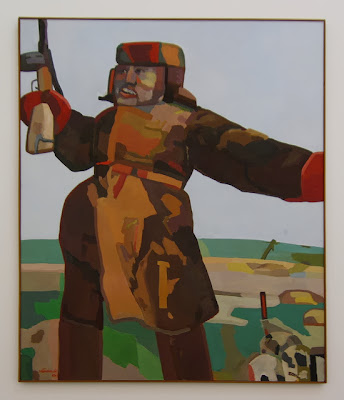 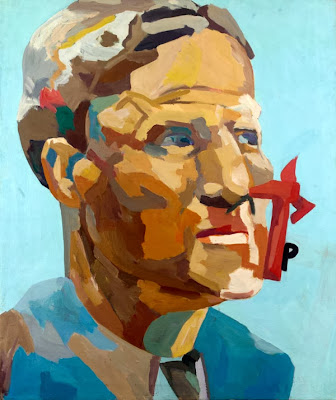 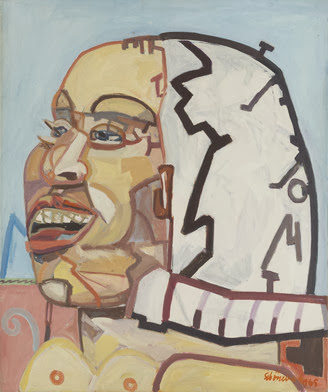 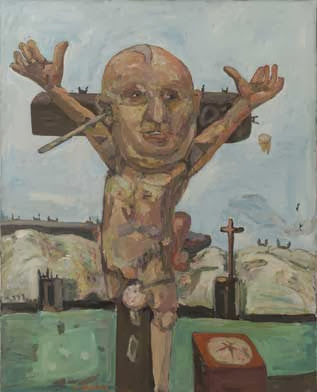 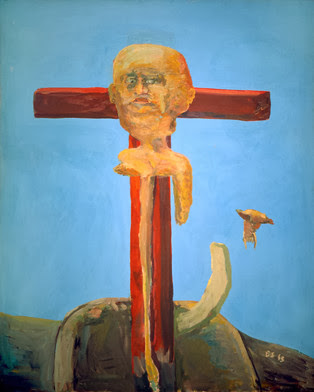 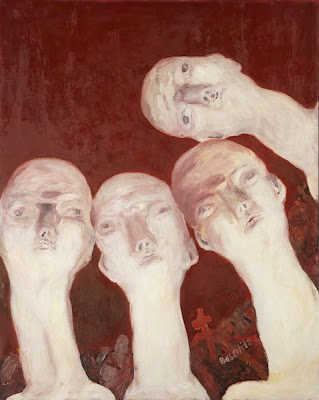 Amplify’d from socialartsnetwork.ning.com
See this Amp at http://amplify.com/u/brmy2
Posted by T. Tex Edwards at 11:32 AM No comments: