Jack Ruby, The Carousel Club, in Dallas. The Carousel sat across the street from the Hotel Adolphus at 1312½ Commerce St., upstairs from a delicatessen. The outdoor walls were covered with provocative photos of scantily clad burlesque dancers, offering a glimpse of what could be viewed inside for a $2 cover charge. The dancers drew large crowds to three stages where they stripped down to g-strings and pasties.

Uncollected Buk from Laugh Literary No. 1, 1969 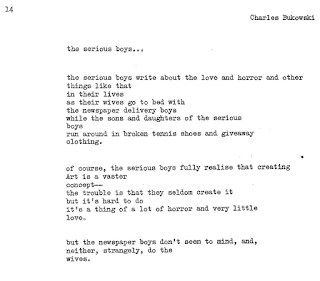 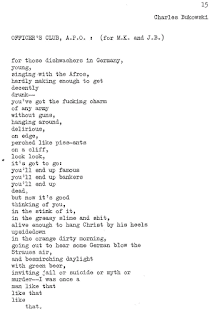 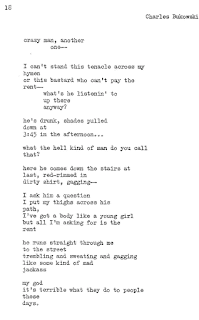 This is one of the most powerful books I've read in years. An autobiographical masterpiece of brutal no-punches-pulled-confessional­-honesty that raises the bar when it comes to how far a writer will go to tell it exactly as it happened, warts and all, and in graphic detail.


Those wishing to find out more about the life of John Fante will be amply rewarded by his son's candid account of the great writer's life. But this book gives﻿ us far more than that. It awakens something somewhere deep.
Ringinatin

First 10 minutes of an hour interview with author and playwright, Dan Fante on WorldStreams,
February 17, 2010. Listen to the complete interview a thttp://www.worldstreams.org/past.html
Posted by T. Tex Edwards at 2:36 AM No comments: 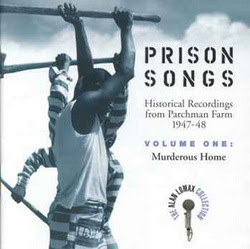 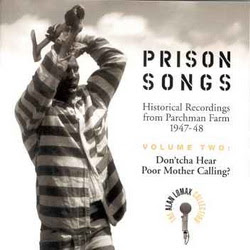 These songs belong to the musical tradition which Africans brought to the New World, but they are also as American as the Mississippi River. They were born out of the very rock and earth of this country, as black hands broke the soil, moved, reformed it, and rivers of stinging sweat poured upon the land under the blazing heat of Southern skies, and are mounted upon the passion that this struggle with nature brought forth. They tell us the story of the slave gang, the sharecropper system, the lawless work camp, the chain gang, the pen. (Alan Lomax)
http://www.mediafire.com/?brdrnnn25aunxiw

Stripper Blaze Starr Recalls Her Affair with the Governor

FOR SYDIOTS ONLY: Wondering and Dreaming (a self-interview with Ewgeni Reingold)

The Holy Church of Iggy the Inuit  "pinched" this from  the Spanish blog Solo En Las Nubes, so we are "pinching" it from them. Life isn't fair, but if you want fair, there's one in Dallas every October...

Wondering and Dreaming (a self-interview with Ewgeni Reingold)

The Venn-diagram-intersection of Proto-Floyd, Vintage-Floyd and Syd Barrett anorak sets isn't that ginormous and even if a same person carries different identities throughout forums and social media websites you keep on stumbling upon each other. Unfortunately, the Reverend is not really sure what the previous sentence really tries to say.
The Holy Church of Iggy the Inuit came acrossEwgeni Reingold around October 2008 and our Russian friend is the living proof that new blood can bring a breath of fresh air into our rather sclerotised Syd Barrett community. Without wanting to sound too morbid weSydiots need to realise that there are only a good two, perhaps three, decades left to unravel those great unsolved Pink Floyd or Syd Barrett mysteries. After that we will only have memories from third-party sources and not from the (f)actual people themselves...
All it takes are some adventurous people who dare to ask some questions, search through archives and go digging for the holy grails that are still undiscovered. Ewgeni did just that and his YouTube channel has several gems, not only from Pink Floyd or Syd Barrett, that would have stayed unnoticed without his research.
The Spanish blog Solo En Las Nubes had the honour to self-interview Ewgeni and the Holy Church of Iggy the Inuit simply pinched the result and put is here. Life isn't fair, but such is life.

Solo en las Nubes self-interviews (in English)
It is with great pleasure that the Reverend introduces a new contributor at the Holy Church of Iggy the Inuit. Not only did Antonio Jesús live in the beautiful city of Cambridge but as editor of the slightly fantastic Spanish Syd Barrett blog Solo en las Nubes he has published severalAutoentrevista or Self-Interviews with Barrett specialists, biographers and friends.
Felix Atagong: an honest man
Warren Dosanjh, Syd Barrett's first manager
Kiloh Smith Interview, hosted at Syd Barrett Pink Floyd
Lee Wood, the man who knows everything
Duggie Fields, much more than a room-mate
Antonio Jesús Reyes, a new career in a new town
Wondering and Dreaming (a self-interview with Ewgeni Reingold)

Posted by Antonio Jesús
Posted by T. Tex Edwards at 12:16 PM No comments: