By Paul Schattenberg
Texas A&M AgriLife Extension Service
An Australian man made national news recently and was dubbed "Ant Man" after surviving for almost a week in the unforgiving outback by eating ants - something he had seen survival expert Bear Grylls do on television.

While such a tale seems odd to Americans, entomophagy or the eating of insects for food goes back tens of thousands of years and continues today, said Texas A&M AgriLife Extension Service entomologist Molly Keck for Bexar County.
"People in the United States and in other Western cultures usually find the idea of eating insects unappealing, but bugs are a normal part of the diet in many countries of the world," Keck said.
Keck recently hosted a unique entomophagy dinner event at a private residence near San Antonio. More than 70 people paid $35 each to attend the Bug Banquet she coordinated to educate people on insects as a food source and to serve them unique foods prepared with insect ingredients.
Dinner was prepared by chef Jose Cervantes and Bexar County 4-H Food Challenge team members, with assistance from other area 4-H members and employees of the AgriLife Extension office for Bexar County. Members of the 4-H Entomology Team greeted attendees at the door and helped serve the meal.
The menu included fire ant queso dip, candied pear salad greens with roasted mealworms, goat cheese quesadillas with tortillas made with cricket flour, and baked apples with cricket granola. Drinks included a cocktail made with honey produced by bees provided by AgriLife Extension to the San Antonio Food Bank to help increase pollination of the Food Bank Farm and for agency vegetable and fruit trials there.
Vegetables used in the evening's dishes were harvested from the Children's Vegetable Garden, a joint youth horticulture program of AgriLife Extension and the San Antonio Botanical Garden.
Reece Moffitt, a violinist who won recognition in the musical instrument competition in the statewide 4-H Roundup, provided entertainment for the event.
"Diners had the opportunity to eat an expertly prepared four-course meal made with delectable insects paired with an appropriate cocktail, beer or wine," she said. "Our goal was to give them an enjoyable and unusual dining experience while introducing them to a new way of thinking about their food."
One of Keck's youth entomology program participants, Ian Kusch, was given an opportunity to speak to the diners about his interest in entomology and entomophagy.
"My interest in entomophagy began while I was preparing for a science fair," said Kusch, who has been an entomology program participant for the past six years. "I've always been interested in insects, but then I learned about how people in many countries eat them and how they are a good source of nutrition."
Keck also spoke to the attendees, explaining how insects can be a viable "agricultural product" and alternative or supplemental food source for an ever-growing world population.
Gary Saathoff of Devine was one of the Bug Banquet diners, but this was not his first experience with entomophagy.
"I've actually eaten insects before, but that was mainly during military survival training and while teaching wilderness survival skills to Boy Scouts as an adult leader," Saathoff said. "Of course, they were raw and didn't taste very good."
He said this "bug-eating" experience was far more enjoyable.
"The mealworms in the salad added a buttery and nutty flavor," he said. "I couldn't really taste the fire ants in the queso, so they didn't affect the flavor and I know they provided extra protein."
Another diner, Patrice Cole of Adkins, whose family is involved in beekeeping, said she was hesitant when she first heard about the event.
"But when I got here and saw how the food was being prepared and how good the menu looked, I wasn't squeamish," Cole said. "You couldn't really taste the insects in some of the dishes. And in the ones where you could taste them, they added an interesting flavor that balanced the other flavors. Everything was really nice and the food was presented really well."
Keck said she thought the event was both a culinary and educational success.
"Based on what I heard at the Bug Banquet and after it, everyone had a good time and people were pleased with the menu and the quality and taste of the food," she said. "It was also a good opportunity to let people know that insects are a viable agricultural product and can be part of the solution toward ensuring the future food security of the planet."
Posted by T. Tex Edwards at 5:28 PM No comments: 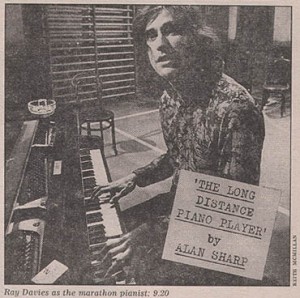 A dingy municipal hall in a nondescript northern town plays host to Pete (Ray Davies) a phenomenon, a true one-off of Herculean proportions - at least, according to his loudmouth, cod-American manager Jack Burnshaw (Norman Rossington). Over the next few days, as Jack barks at nonplussed townsfolk through a megaphone while his gofer Alf (James 'Red Shift' Hazeldine) bangs resignedly on a drum, Pete will be attempting to break the record for non-stop piano playing. Why, apart from the 'uniqueness' of the achievement, no-one can be quite sure, least of all Pete's long-suffering wife Ruth (Lois Daine) holed up in a makeshift bedroom for the duration, within earshot of the relentless drone of Pete's playing. Locals seem none to bothered either - two old duffers dusting down the snooker tables in the hall chat idly about him because - well, he's being talked about, apparently.
Info from TV Cream.

The first of the BBC Play For Today series. It replaced the Wednesday Play and the title was changed because it appeared on the BBC on various days of the week. Ray Davies (lead singer of the Kinks) plays a piano player who attempts to do a 4 day non stop piano playing marathon. Norman Rossington plays his manager who organises the event and theres an early appearnce by James Hazeldine (Londons Burning) as ALF a simple lad who acts as a gofer for Ray Davies character. The play builds up from the initial early hours of the marathon when there is little interest in his record breaking attempt right through till the end with the press getting involved and beginning to show an interest. There is a side story involving his wife who begins to grow detatched from him whilst he attempts the record. Does he do it? Watch and find out.............if you can find a copy. Recommended viewing and a good snapshot of how life was in the early seventies great britain. -- IMDb 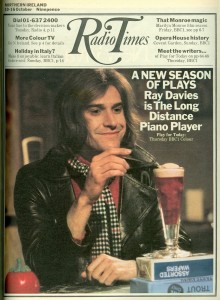 image via: THE LONG DISTANCE PIANO PLAYER (1970) BY JOHN WHEATCROFT 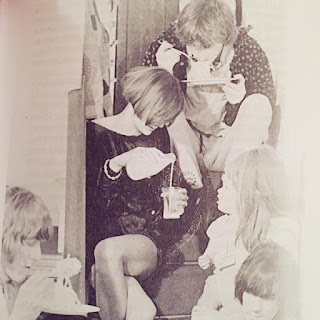 
(8) That's How Much I Need You, Save Yourself, I Should Have Known, Jet-Propelled Photograph/Shooting At The Moon, When I Don't Want You, Memories, You Don't Remember, She's Gone, I'd Rather Be With You. Fred The Fish was never released and presumed lost. What I imagine is a very different version appeared on Daevid Allen's Bananamoon album in 1971.

The 82 (purported) Commandments of Gurdjieff 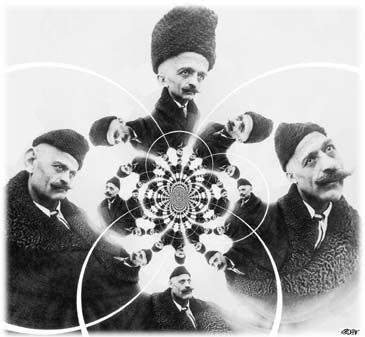 1. Ground your attention on yourself. Be conscious at every moment of what you are thinking, sensing, feeling, desiring, and doing.

2. Always finish what you have begun.

3. Whatever you are doing, do it as well as possible.

4. Do not become attached to anything that can destroy you in the course of time.
5. Develop your generosity ‒ but secretly.

6. Treat everyone as if he or she was a close relative.

7. Organize what you have disorganized.
8. Learn to receive and give thanks for every gift.

9. Stop defining yourself.
10. Do not lie or steal, for you lie to yourself and steal from yourself.

11. Help your neighbor, but do not make him dependent.
12. Do not encourage others to imitate you.
13. Make work plans and accomplish them.
14. Do not take up too much space.

15. Make no useless movements or sounds.

16. If you lack faith, pretend to have it.
17. Do not allow yourself to be impressed by strong personalities.

18. Do not regard anyone or anything as your possession.

21. Sleep and eat only as much as necessary.

22. Do not speak of your personal problems.

23. Do not express judgment or criticism when you are ignorant of most of the factors involved.

24. Do not establish useless friendships.

27. Respect contracts you have signed.

29. Never envy the luck or success of anyone.

30. Say no more than necessary.

31. Do not think of the profits your work will engender.

34. In any discussion, put yourself in the other person’s place.

35. Admit that someone else may be superior to you.

36. Do not eliminate, but transmute.

37. Conquer your fears, for each of them represents a camouflaged desire.
38. Help others to help themselves.

39. Conquer your aversions and come closer to those who inspire rejection in you.

40. Do not react to what others say about you, whether praise or blame.

41. Transform your pride into dignity.

42. Transform your anger into creativity.

43. Transform your greed into respect for beauty.

44. Transform your envy into admiration for the values of the other.

45. Transform your hate into charity.
46. Neither praise nor insult yourself.

50. Never give orders to gain the satisfaction of being obeyed.

51. Pay for services performed for you.
52. Do not proselytize your work or ideas.
53. Do not try to make others feel for you emotions such as pity, admiration, sympathy, or complicity.
54. Do not try to distinguish yourself by your appearance.

55. Never contradict; instead, be silent.

56. Do not contract debts; acquire and pay immediately.

57. If you offend someone, ask his or her pardon; if you have offended a person publicly, apologize publicly.

58. When you realize you have said something that is mistaken, do not persist in error through pride; instead, immediately retract it.

59. Never defend your old ideas simply because you are the one who expressed them.

60. Do not keep useless objects.

61. Do not adorn yourself with exotic ideas.

62. Do not have your photograph taken with famous people.

63. Justify yourself to no one, and keep your own counsel.

64. Never define yourself by what you possess.
65. Never speak of yourself without considering that you might change.
66. Accept that nothing belongs to you.
67. When someone asks your opinion about something or someone, speak only of his or her qualities.

68. When you become ill, regard your illness as your teacher, not as something to be hated.

69. Look directly, and do not hide yourself.

70. Do not forget your dead, but accord them a limited place and do not allow them to invade your life.

71. Wherever you live, always find a space that you devote to the sacred.
72. When you perform a service, make your effort inconspicuous.
73. If you decide to work to help others, do it with pleasure.
74. If you are hesitating between doing and not doing, take the risk of doing.
75. Do not try to be everything to your spouse; accept that there are things that you cannot give him or her but which others can.

76. When someone is speaking to an interested audience, do not contradict that person and steal his or her audience.

77. Live on money you have earned.
78. Never brag about amorous adventures
.
79. Never glorify your weaknesses.
80. Never visit someone only to pass the time.

82. If you are meditating and a devil appears, make the devil meditate too.
Posted by T. Tex Edwards at 11:31 PM No comments: