Today is the eleventh anniversary of Jack Nitzsche's passing.  While working on related posts for my Facebook page, I came across "Baby That's Me" by The Fashions, written by Jackie DeShannon and Jack Nitzsche, and released on the Cameo label in 1964.  As the YouTube uploader's comments explain, this release was quickly followed a few month's later by Lesley Gore's version.  Then, a bit later, by Britian's ultra-fine girl group, The Cake, who put out a magnifico version in 1967.  So, for your listening pleasure and convenience,  I've posted all three versions here accompanied by the notes supplied by the YouTube uploaders of each.

Uploaded by reichardtaj on Jul 22, 2010
NO COPYRIGHT INFRINGEMENT INTENDED - (Cameo 331) Out of Los Angeles, this 1964 release doesn't give any producer or arranger credits but more than likely, co-writer JACK NITZSCHE probably was involved. This is the first version of the tune followed by Lesley Gore a few months later which Nitzsche is credited as arranger and lastly, The Cake and their 1967 version. Although The Cake's version was produced by Charlie Greene & Brian Stone and arranged by Harold Battiste (this trio worked with Sonny & Cher in the early days of their career), the SOUND of the record has Nitzsche's style all over it.

Uploaded by DeShannoninmyheart on Aug 22, 2010
I think that The Cake's version is quite better, but "Baby That's Me" is still a classic in every way.

The Cake - Baby That's Me (One of the best

girlgroup songs ever - written by Jackie)

Uploaded by DeShannoninmyheart on May 12, 2010
I was so shocked the first time I listening to an album by an unknown girlgroup, called The Cake. The album started with three Spectoresque songs, but it was "Baby That's Me" that was by far the best of them.
And yes, Jackie wrote this magificent song, too!
Posted by T. Tex Edwards at 2:12 PM 1 comment: 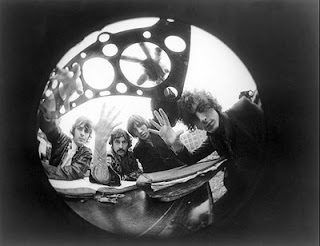 Could early Pink Floyd demos with Syd Barrett finally see the light of day? We've heard bootlegs of 'Lucy Leave' and "I'm A King Bee", but what about the titles "Walk With Me Sydney" and
"Double O-Bo"?


Jen D at the WHATEVERSHEBRINGSWESING Yahoo Group shared this bit from Nick Mason in the new UNCUT:


New copy of Uncut just came in the post (Bolan cover) - There's afeature & Nick interview re the Dark side Immersions set & his vault.From the article by David Cavanagh"...So far these three albums -easily Floyd's biggest sellers - arethe only one's confirmed for ' Immersion' editions. Unofficially,though, plans are afoot that will electrify Syd Barret's fanbase. Butmore on that later...The Floyd story started with Syd Barrett, their first songwriter,their first leader, the man who gave them their name. At a certainpoint in the interview I look Mason in the eye and as him if 'Why PinkFloyd...? is going to be the point in history when "Scream Thy LastScream", "Vegetable Man" and other unreleased 1967 tracks are finally,after many dashed hopes and false alarms, going to receive an officialrelease.Mason [at once]: "Yes. I would love that. If we did an 'Immersion'version of the early stuff, we could have all of those, and then we'vegot some demos that were made really early on, which I think are justcharming. these come from 1965 and include 'Lucy Leave', "I'm A KingBee", "Walk With Me Sydney", and "Double O-Bo". They're very R'n'B. Ofcourse we were yet another English band who wanted to be an American-sstyle R'n'B band. We recorded the demo at Decca. I think it must havebeen, in Broadhurst Gardens. A friend of Rick's was working there asan engineer, and managed to sneak us in on a Saturday night when thestudio wasn't operating."Have you always know of this tape's existence?Mason: "Yes, I've always had a copy of it.""Nick came in with a huge box full of quarter tapes which had beensitting in storage," relates Andy Jackson. "When we trawled throughthem, there were a lot of early recordings, pre-Piper, when they wereplaying "Louie, Louie" and being an R'n'B band. Then there were quitea few Barrett-era Floyd tracks that never got released, which weremixed recently as part of [the work done on] An Introduction To SydBarrett, when we didn't know that they weren't going to get used.There is potentially the material to make an album of unreleasedBarrett-era stuff."In other words [I ask Mason], there'll be an 'Immersion' edition ofThe Piper At The Gates Of Dawn? Or else an 'Immersion' that twinsPiper with A Saucerful Of Secrets?Mason: "More likely to be the latter, but yes, definitely. PersonallyI think the two albums go together very well, if you position thetracks suitably, because 'Jugband Blues' on Saucer is Syd's song andit's his farewell moment in a way"That 1967-68 'Immersion' set will probably come out next summer Masonestimates. It will have been a long. long wait."^ followed by Vernon Fitch on the quality of live Syd Floyd recordings(he mentions the 'new' Stockholm concert being decent quality) & abox out on Syd era outakes.-- support fund for indie labels affected by sony warehouse firehttp://cognitivedis sonancerecords. com/labellove/My blog: http://jenna- appleseed. livejournal. comA Strummer/Clash etc. inspired fanzine http://bit.ly/ jsemailsig
Posted by T. Tex Edwards at 10:38 AM No comments: