Sometimes I like to mirror (or copy) what I think are important posts made elsewhere online because occasionally the original source will disappear completely. I've only had the original author complain about this but once. But in a couple of cases, the original online source has disappeared and the author or subject of the post has contacted me relieved that someone had preserved the post and gratefully thanked me. The following post was posted on Facebook by Miriam Linna. I know the odds of Facebook disappearing seems low at this point. (Think Myspace.) But sometimes someone innocently posts material Facebook deems outside their "community standards" and suspends the account and years of posts are lost. Odds are this material from Miriam will resurface in a new future edition of KICKS Magazine. Hopefully. 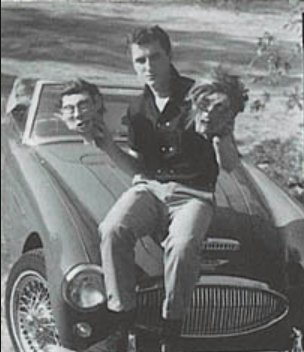 “REMEMBERING RAT PFINK RON HAYDOCK DEPT. Here at HQ, we remember Ron, our ultimate #1 culture mangling superhero, every day, all day. On Aug 14, 1977, Ron's life ended his life under the wheels of an 18-wheeler in Victorville, California. For a guy who struggled with mental health issues for his entire life, he was insanely productive. The rock n' roll uber-fanatic played guitar, inked songs, made records, wrote about records, horror movies, monster movies, western movies, film stars, forgotten lore, and wrote, inspired, and starred in movies himself, plus delivered a staggering number of paperback books under various pseudonyms. Documenting his life has been a main focus here.

In 1987, ten years after his passing, I visited Ron's brother in trying to wrap my head around why the supernova known alternately as Lonnie Lord, Vin Saxon, Arnold Hayes, Don Sheppard and Jerry Lee Vincent (among others) would choose to end his days as he did. The brother gave me the briefcase that Ron was carrying that night in August. He had added to the mix, the death certificate, various insurance forms linked to the event of his death, and two pocket-size loose leaf binders. One was his address book and the other was a meticulous accounting of his stories, submissions and publications. Those two little binders have lead me into a life where all things must measure up against the Haydock yardstick.

Bhob Stewart, who would become my best friend and in all ways, mentor (and I dont toss that word around), was Ron's NYC roommate in the late 60s), told me when we first met to discuss Ron, that unemployed Ron would get dressed for work every morning and sit down at the kitchen table to type. BHob said a stack of typed pages grew and grew and grew ("thousands of pages!") and that he'd read some of these "incredible tales", thinking Ron would submit them to publishers. One day, the stack disappeared. Then Ron vanished. Bhob never saw the stack-- or Ron-- again. For years I wondered about that stack of stories.

As fate would have it, and this, proof that nothing is an accident, I was visiting in Burbank with Ron's friend Don Glut. As I went to leave, running very late for the flight home, Don asked me to come into into his garage. He had something to give me. He pulled out two cobwebby (really!) legal-size boxes that had been passed along to him when friends sorted through Ron's apartment after his death. Don had not opened them since 1977. When I got back to NYC and cracked open the boxes, I came very close to fainting. Inside, tightly packed, were the "thousands of pages" that had vanished from Bhob's kitchen table decades earlier.

Forry Ackerman told me that he chose Ron as heir apparent to Famous Monsters. Ray Dennis Steckler said that Ron was visionary, and "the talented one." I've been unraveling his story, for over thirty years. The big revelations at one time were in "Runnin' Wild" in Kicks #7 and on the Norton anthology "99 Chicks". It's time for an update to honor our hero, Midwest everyman superhero Ron Haydock. Always in memory. Here's my favorite photo. And the slowest tune he ever recorded.”