This post was originally posted here on April 18, 2017. The accompanying video has since been removed from youtube. Luckily someone else has reposted the Rockpile documentary, "Born Fighters" and I have updated this blogpost. So here it is (again)...

I've started a new blog called The Eternal Rhythm of Gardening about gardening, food, plants, locations, observations. I will reproduce the first installment below. If you like it, please head on over to Wordpress at the link above and follow it. 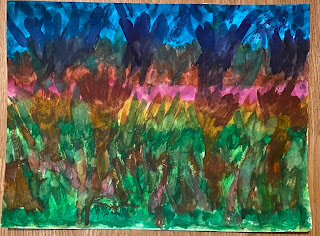 My mother always loved her plants, and I dabbled with gardening in my twenties back during my first life. That is one good thing I can attribute to my horrible controlling ex-wife. Back in the 1970s, she got me started planting a few vegetables in our back yard. I’m sure there are other good things too, but I just can’t remember them right now. After the escape and divorce and eventual severing of all ties with the city of my birth, Dallas; I decided to plant some tomatoes and peppers in the front flowerbeds at the dilapidated duplex I lived in during my first Austin residency in the mid-1980s. Then I moved to Southern California in 1986, and it was urban apartments in Hollywood and no gardening. When I moved back to Texas in 1990, I finally had vacant space at a tiny rent house set way back from the street with a big yard in Dallas. I have planted a garden every year continuously since then. By 1995 I moved back to Austin, and by the end of 2004 my sweetie and I got away from the rent houses and into our own place to landscape and garden forever. Even at my lowest points of drug addiction, alcoholism, and depression; I have always managed to gather the desire and energy to put some transplants in and hope for the best. I learned that every year is different. Different weather, different bugs and diseases, different varieties did better and worse than last year. I learned you can’t predict the future, but there were a few things that remained constant. Yes, there were actually a few things I observed and remembered through the last 30 years. I also noticed that the traditional gardening season coincided with one of my other loves, the baseball season. Gardening also taught me how to be mindful and remain in the present. To observe every single day and not regret what happened yesterday, and not get too far ahead of myself. How to endure adversity and sit with it until it passes. How to be happy and satisfied with what I have. That happy is an unobtainable goal. But rather happy is a by-product of my going with the flow. When I have relapsed and had that somehow forgotten again misery come flooding back into my thoughts, gardening gives me concrete proof that things have before and will soon be better again. I guess it is my religion, my medicine, my drug of choice, my salvation, my inspiration, my best friend, and my favorite creative outlet. Not to get too carried away here, but along with my soulmate of the last 32 years, it is my rock and the thing that keeps me going. And I am most appreciative.