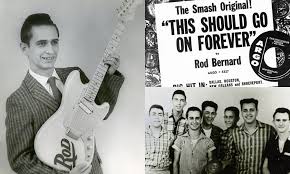 This is part one of a documentary I made in 1986 about my father, swamp pop musician Rod Bernard. I think it came out well, even though I couldn't get Dad to stop using his "announcer voice" during the interview segments. Dad still plays music today on occasion, and still works in TV (albeit for a different station). My grandfather, who appears in the video, died about a decade ago. This video got me into NYU Film School, which I quit after about a month.
--Shane Bernard

This is part two of a documentary that I made in 1986 about my father, swamp pop musician Rod Bernard.
--Shane Bernard


Rod Bernard - This Should Go On Forever

The King of Zydeco (pronounce Za-ree-co please) Clifton Chenier (1925 - 1987) a Creole French-speaking native of Opelousas, Louisiana, was an eminent performer and recording artist of Zydeco, which arose from Cajun and Creole music, with R&B, jazz, and blues influences. He played the accordion and won a Grammy Award in 1983. In 1984 he was honored as a National Heritage Fellow and in 1989 was inducted posthumously into the Blues Hall of Fame... From Louisiana too, Rod Bernard, a Rockin' Swamp pop artist was recording "This Should Go On Forever" and was the first "Swamp Pop" million seller.  Before the age of 20, Rod was touring the USA and even appeared on the Dick Clark "Bandstand" Show. Rod's band, "The Twisters" was one of the hottest rock 'n roll groups of the late fifties and early sixties.  Rod was fortunate to record an album with the great King of Zydeco, "Clifton Chenier" before his untimely death.  If there is a King of Swamp Pop music, it would have to be this man.