THE JESTERS stompity stomp (1965-66)
They sound a little like a crazed '60s garage band (if that's not a redundant description) that owes far more to '50s rock & roll, rockabilly, and R&B than the usual such group -- not as if they've digested those influences primarily via British Invasion bands, but more like they've studied the original '50s performers themselves. Bo Diddley and Chuck Berry might be the most audible of those influences, but certainly you can hear some Carl Perkins.

Amplify’d from anorakthing.blogspot.com
See this Amp at http://amplify.com/u/bw9vc
Posted by T. Tex Edwards at 12:10 AM No comments: 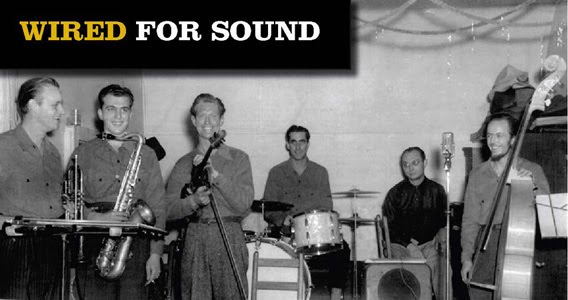 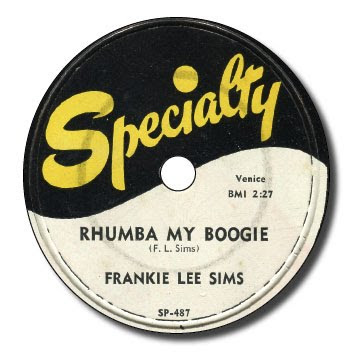 "I'll Get Along Somehow"

Frankie Lee Sims' Lucy Mae Blues LP on Specialty, released in 1970 (but kept in print through the '90s), and drawn from sessions made in Dallas in 1953-54, is probably the single finest blues album by a Texas artist. The only contenders for that title are Lightnin's Herald album and/or Lightnin's Texas Blues Man LP. Sadly, it came out too late for it to benefit Sims, who died just before it was released. Sims should have been "rediscovered" in the early '60s, but wasn't. Cue "O Fortuna" here.Lucy Mae Blues was compiled by Barry Hansen, a man of impeccable taste. Hansen carefully listened to all of Sims's Specialty masters and selected the 12 best. For a long time, I assumed that these were "the complete" Specialty recordings of Frankie Lee Sims. Wrong. Hansen deliberately left out several masters, including both sides of this, Frankie's final Specialty single, from 1954. 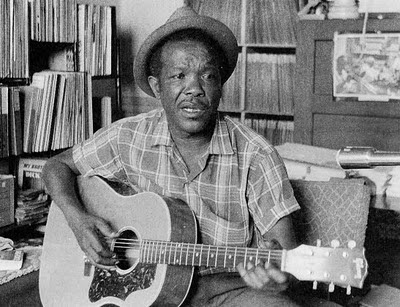 Above: Frankie Lee Sims c. 1969, among his huge collection of rare 78s and LPs.
I don't blame Hansen for leaving "Rhumba My Boogie" off the LP. It is the weakest track Sims ever recorded, a goofy attempt to cash in on the current pop craze for rhumbas. A rural Texas bluesman recreating himself as Xavier Cugat is not going to produce great music, but the music world being what it is, it isn't hard to picture "Rhumba My Boogie" becoming a huge hit and Sims becoming known as "The Texas Rhumba King" for the rest of his career. Billboard said on April 3, 1954, that "there's no denying the power of this Latinized R&B effort.""I'll Get Along Somehow" is better, but only marginally, being a generic "Worried Life Blues" re-write. Only one photograph of Sims exists, taken a year before he died by Chris Strachwitz, who also interviewed him. Sims was born in New Orleans and absorbed some of that city's culture (he claimed "Buddy Bolden's Blues" the first song he learned) but grew up in Marshall, Texas. One reason why he wasn't "rediscovered" might have something to do with the fact that he shot a man in Dallas ("drinking all that wine, all that mess") and must have spent some time in jail. As with everything else to do with Sims, the dates are hazy. Below is the complete Sims interview by Chris Strachwitz. Click images to enlarge. "Frankie Lee Sims" - Blues Unlimited #119Page One 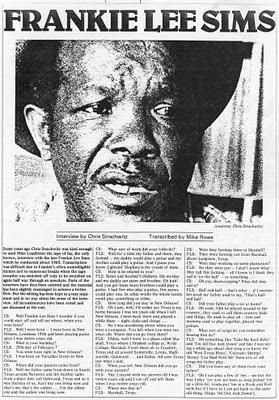 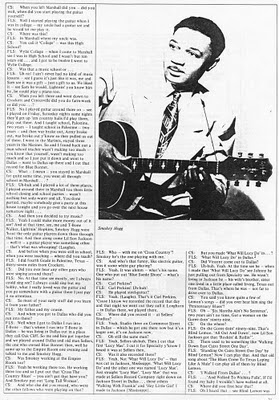 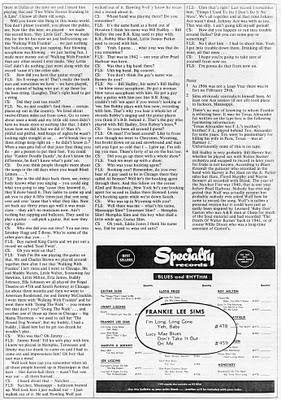 
via Stevo at whatevershebringswesing yahoo group...
Posted via email from up against the flooring
Posted by T. Tex Edwards at 10:39 AM No comments:

Soft Machine - Save Yourself - Hendrix Tour 1968

Rare footage of 1968 Hendrix Tour accompanied by classic Soft Machine's song of the same year. Thanks to Driver2Vegas

Weird french dancers with gasmasks dancing to "Hope For Happiness" by the Soft Machine in french tv 1969.

Bonzo Dog Band - Do Not Adjust Your Set (FLAC)

Amplify’d from halsprogressiverockblog.blogspot.com
See this Amp at http://amplify.com/u/bsk73
Posted by T. Tex Edwards at 2:05 AM No comments: