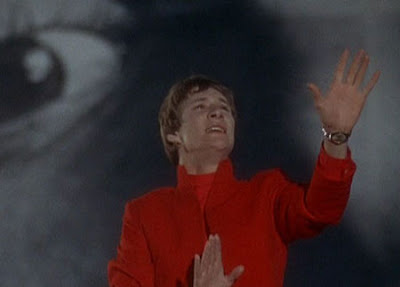 I saw the film "Privilege" when I was a teenager & then later found the soundtrack album in the cutouts at Woolco & bought it for only .99 cents. This was during the time period when the Alice Cooper Group were releasing their early albums & I noticed some similarities in their show & scenes from the film, both musically & visually. In the late 1970's, Patti Smith later did a credible cover of 'Set Me Free', a song from the film. I'd been thinking of "Privilege" occasionally, now & then, during the last couple of years. Then I noticed a DVD of it was being released in Great Britain last year. Maybe an American DVD release will happen soon & I can re-see the film from a different perspective 40 years later. But probably much like the Scott Walker documentary, "30th Century Man", the big screen might be required for the full effect & creepiness factor. A friend recently posted a YouTube clip from the film on his Facebook page (thanks Tim) & I checked & found a number of clips on YouTube. Here's what I found there:

Anticipating punk rock, Peter Watkins' semi-documentary study of a future society using music to enslave the masses appropriates some unauthorized reenactments from the National Film Board of Canada's groundbreaking Paul Anka docu "Lonely Boy". How Universal ended up distributing this is a mystery even they couldn't solve.

Steven Shorter / Paul Jones "Privilege" (1967)
Steven Shorter's 1st performance in Peter Watkins's 1967 "Privilege," an obvious piss take on Beatlemania and the cult of celebrity worship, but carefully staged for manipulative ends in this scene. Although the police present as bad guys for the fans, Shorter, singing here (Paul Jones) is actually a govt.-manufactured pop icon and later the same police are seen protecting the icon as he retires to his dressing room. By the end of the film Shorter is making Church & State-approved nationalist Christian rock that encourages fans to embrace a new type of Christo-fascism.

Privilege (1967) "a fruitful conformity" Paul Jones
one of my favorite scenes from the Peter Watkins film PRIVILEGE (1967 UK) After directing several extraordinary documentaries for the BBC, including the award-winning The War Game and Culloden, Peter Watkins made his first dramatic feature with this flawed but striking film about Steven Shorter (Paul Jones), a pop singer in a future society where entertainment is controlled by a totalitarian government. Shorter's music and image are used to channel the impulses of rebellious youth; in one concert sequence, the crowd watches him sing a plaintive plea for love and understanding while locked in a cage surrounded by police officers armed with clubs. While Shorter is remarkably popular, he's also living a life created for him by the government, which Steven knows is a sham. When Shorter's handlers decide to revamp his image into that of an obedient, religious boy, he rebels, to his peril. Model Jean Shrimpton made her film debut here as an artist commissioned to paint a portrait of Shorter. Privilege later became something of a cult film; one of the film's admirers was rock poet Patti Smith, who recorded one of "Steven Shorter"'s songs, 'Set Me Free', on her 1978 album Easter.

'Jerusalem' from the 1967 film "Privilege".
This song, sung by the George Bean Group, is taken from the 1967 Peter Watkins film ''Privilege'' starring Paul Jones. In this film Jones plays Steven Shorter, Britain's most loved pop star, whose career is carefully managed and manipulated. Eventually his popularity is used to launch a new form of Nationalism dominated by the church who demand that the youth of Britain swear an allegiance to flag and country with the promise 'I will conform'. Anyone who has seen the famous Nazi propaganda film "Triumph of the will" by Leni Riefenstahl will probably notice some close similarities between some of the images in that film and this extract from ''Privilege''.

Steven Shorter / Paul Jones 'Privilege' (1967)
From Peter Watkins's 1967 film 'Privilege,' Watkins's subtly satirical take on Beatlemania and a vision of a totalitarian future in which the Church & State use pop icons to induce conformity in the public. In this clip, official govt. pop icon Steven Shorter performs a newly Christianized version of a song seen earlier in the movie, and attempts a laying on of hands to cure the infirm...


http://www.youtube.com/watch?v=oqD0syVRKfg
Embedding disabled by request, so click this link on the line above...
PRIVILEGE / Paul Jones (Audio)

Here's a review of the DVD a blog called Electric Roulette ran a while back: 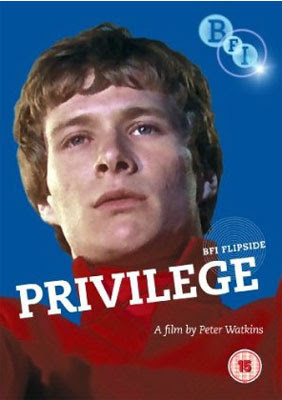 Some movies gain a reputation by being seen, others, like Peter Watkins' Privilege, are noted for exactiy the opposite reason. Thankfully we can now view this 60s cult classic for all the right reasons with the BFI offshoot Flipside kicking off 2010 with a long-overdue reissue.

It got a right old kicking from the critics in '67, but time has been kind to Privilege since. As has the world we live in. Set at a time of a coalition government (Labour and Conservative polices are so similar, they simply run the country together), we discover that the biggest name in the country is pop star Steven Shorter (Paul Jones). His stage act, which sees him imprisoned and abused onstage, is designed to create anger amongst his audience - taking away their anger from the wider world around them and indeed, the government.

On the back of this public adoration, Shorter is a commercial and political tool. Run by committee (with government backing), his music is played on every station, he fronts a chain of Steven Shorter discos UK-wide and dominates consumption of everything from dog food to fridge freezers. If the country's leaders want to sell something, they stick Steven's face on it. Indeed, when the UK has an apple glut, Shorter is brought in to front an ad campaign encouraging us all to eat 6-a-day.

But the ruling elite wants more of Shorter - they want him to bring the public back to the church. Using an all-new stage act where the pop star 'repents' and finds faith at a rally at the national stadium, Shorter fronts the 'Christian Crusade' backed by funky versions of 'Onward Christian Soldiers' and 'Jerusalem' by a house band, some faith healing and fighting words by the church. It's all reminiscent of Nazi Germany - a world where everyone conforms for the 'common good' and intolerance is not accepted.

But that's exactly what's coming from Steven Shorter. In his spare time, he's being painted by artist Vanessa Ritchie (Jean Shrimpton). But not only that - she's asking questions of him and about him, questions that, over time, put doubts into Shorter's head. And on live television, during an awards ceremony, it all comes crashing down as he shows his anger at being unable to live his own life.

As I mentioned earlier, Privilege was hammered by critics back in the day, partly due to its anti-establishment theme, partly because few thought the scenario was even vaguely believable and partly because of the ineffectiveness of the leads. For me, none of that holds up watching this reissue.

Indeed, the scenario is all too real in 2010 - the X Factor's dominance on TV and across the media, the Prime Minister making a point of commenting on the state of Susan Boyle's mental state - entertainment in the modern-era does have the ability to take our minds away from the real problems and concerns of the world. And of course, as the Jonathan Ross/Russell Brand incident of last year showed, the media is capable of generating a public backlash against the biggest of names. A coalition government through a lack of policy difference isn't all that far-fetched either.

As for the leads, well, they work too. Up to a point. Jones perhaps lacks the charisma the pop star role needs, but he certainly has the fragility required for the latter stages of the movie. Shrimpton quite obviously isn't a big screen natural - you struggle to even hear her at times. But she's a scene stealer everytime she appears. She wasn't the face of the 1960s by chance you know.

But the biggest plus of Privilege is Peter Watkins. A controversial figure, he had come to the movie business after his most prominent work, The War Game, was banned by the BBC. He wasn't willing to pull any punches for the big screen either.

The film is part mock documentary and part movie. Slightly disconcerting at first, but very effective in getting across the scenario, the world of Privilege and the succession of shady figures that run it. Everyone from Shorter's minder and anarchist music arranger to the businessmen with the 'real' power sitting on the 'committee' have their own (less than likeable) personalities and quotable lines. There's a real attention to detail here, which means Privilege is the kind of movies that can take repeated viewing.

Of course, there are holes in the movie - Shorter's act for a start, Vanessa's ability to convince 'break' Shorter in such a brief time and to some extent, the idea that the entire population will buy into one pop star. But let's be honest, since when did a movie have to completely conform to logic?

Overall, Privilege is a fine film and one that's ripe for reappraisal. Unlikely ever to shake off the words 'cult classic', it's a movie that has blossomed with age despite being still very much of its age. If you love leftfield movies of that particular decade, you'll love Privilege. And if you don't...well, why are you reading this site?

Finally, a word about the extras. As ever, some fine articles in the booklet, along with the trailer on the disc and some tasty bonus material for fans of the director - early shorts of The Diary of an Unknown Soldier (1959) and The Forgotten Faces (1961). Good work once again Flipside - and good work Amazon, which is selling this for just £7.98 right now on pre-order.

Find out more about the DVD at the Amazon website

...Moving on to our next Flipside reissue, many people will be familiar with Privilege (Peter Watkins, 1967) by reputation at least. It’s a movie that I first saw on British TV back in the days when I was still a teenager. Privilege is a faux documentary set in the near future with a fascistic British establishment exploiting pop singer Steven Shorter (Paul Jones) to manipulate public opinion and behaviour. Johnny Speight who created the original story seems to have taken Bernard Kops’ novel Awake For Mourning (1958) as his starting point. In his full-length fictional debut, Kops depicts teddy boys being manipulated by a fascistic youth party fronted by a pop singer. Privilege takes this idea but really runs with it. The Watkins film is an immediate precursor to The Monkees auto-critique of themselves as plastic pop icons in their countercultural film Head (dir. Bob Rafelson, 1968). The use of Shorter to promote Christianity and national unity at revivalist rallies in Privilege also looks like it influenced, among many other things, the adulation accorded to the Pinball Wizard in the cinematic realisation of Pete Townshend’s rock opera Tommy (dir. Ken Russell, 1975), and some of the musical choices in Derek Jarman’s Jubilee (1978). Since the leading lady in Privilege is none other than top Sixties model Jean Shrimpton in her only fully-fledged film role, this could still prove essential viewing even to those who have no interest in the history of cinema or youth culture...
Posted by T. Tex Edwards at 3:42 AM

Got this DVD coming from Netflix tomorrow. I'm looking forward to seeing it.

Lee
Wrote By Rote
An A to Z Co-host blog